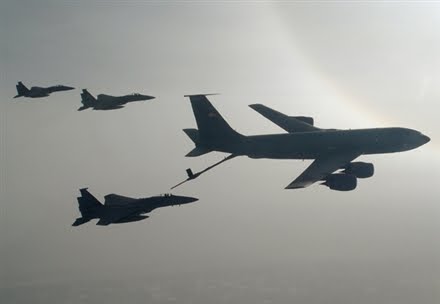 “As we headed south, we realized how critical our fuel situation was. I thought;” This is stupid, we just splashed two MIGs and now we are going to flame out on the way home!” We coordinated (translation: started screaming) for AWACS to send tankers north, and they did. We were still a little worried about enemy contacts. There were two F-1's that Kluso’s flight had seen but not shot at, and there were two MIG-29s that we had chased north. AWACS is telling us that they were coming south again, so here we were up there, low on fuel and with everyone else in our world south of us. ‘Fish’ and ‘Pat O’ are now running north to support our withdrawal. We finally started slow climb to 24,000 feet to improve our fuel flow.


I know that we have shot MIGs, but still that friendly EID I had gotten was nagging me, so I was really happy to see all the F-15s that had been in our AOR on the tanker when we got there. Unfortunately, we were all on different frequencies, so we couldn’t get them off the boom. It would really have been ironic if we had flamed out right behind the tanker! I finally plugged with 600 pounds of fuel in my jet…I couldn’t have gotten anywhere. We each got a thousand pounds of gas, then the tanker ran out. We finally hooked up with a Saudi tanker, which we found after another ten minutes, to get enough gas to get home” (p 101).  USAF F-15Cs, 19-Jan, 1991

Above is an excerpt from: ...And Kill MiGs, Air to Air Combat From Vietnam to the Gulf War (third edition), Squadron/Signal Publications, Lou Drendel. 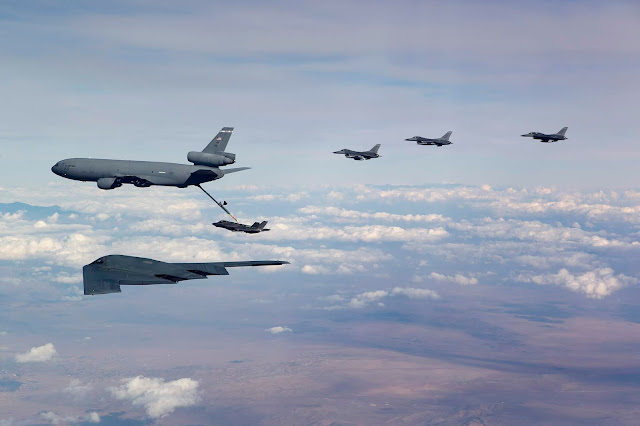 The only 150% certainty in aerial warfare? That pilots check their fuel situation BEFORE committing to any (any) action. At least thats the theory. Please see the video at the bottom of this writing. 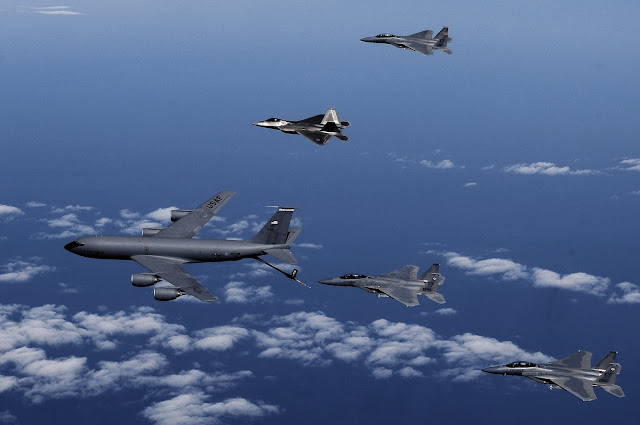 With the recent political flap regarding the USAF KC-X program, its time to look at this critical air tanker subject in its larger context.

Since the Second World War, no army has gone into conflict without reliance on airpower. A required component for those subscribing to the airpower projection doctrine is - something called (air) combat-persistence ... Translation? – Fuel. 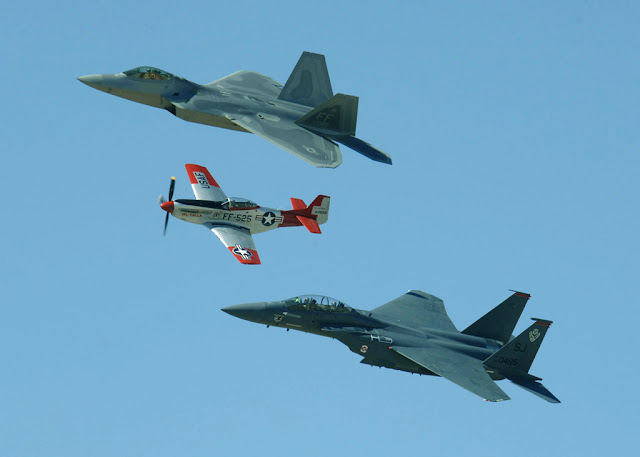 The massive 8th Air Force daylight raids over WWII Germany were effectively unsustainable without fighter escorts with sufficient combat persistence (being at the right place and time) to engage the Luftwaffe in a ‘war of attrition’ as the Luftwaffe was provoked to respond to the mass American bomber streams.


[Below] A war of attrition is precisely what it was. Note American four-engine heavy bombers, even in their defensive "bomber box" formations, and bristling with defensive guns – simply defenseless - in the absence of long-range fighter cover. German fighters (the Fw 190 A-8 in particular) simply fly in from the stern and almost leisurely - chop the bombers to pieces. The much heralded "defensive fire" of four-engine heavy bombers - appears to have been a myth. Be warned, the footage is as remarkable and sobering - as it is terrifying.


Had the attrition of the Luftwaffe not been undertaken, indeed the D-Day landings themselves would not have been possible as to risk another Dunkirk.

Whether, when, or to what degree - the US 8th Air Force leadership realized the true significance (on the Luftwaffe pilot ranks) of a long-range Allied fighter escort to accompany US heavy bombers deep into Germany, has been extensively written about elsewhere. By wars end, the German Luftwaffe was drowning in new German airplanes, but with no one left to fly them.

Combat persistence can literally determine the entire outcome of a conflict. To this end, modern air tanker support also known as in-flight refueling - is essential.

This issue is especially acute for present day, powerful and thirsty 'fast jets.'

The smaller a fighter is - the better. It can be made more nimble and is harder for opponents to spot. This is the main concept behind today’s F-16 Falcon, JAS 39 Gripen, Dassault Rafale, F-35 and some extent the F-18 Hornet and F-22 Raptor (F-22 is smaller than plane it replaces - the F-15). 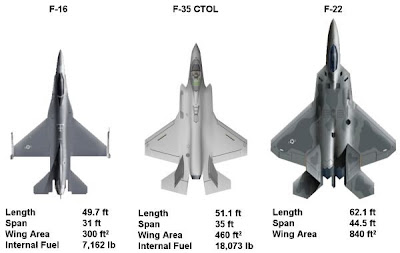 However all (all) American frontline fighters: the F-15, F-16, and F-18, as with the WWII brethren - without exception - operate in wartime with additional external drop tanks. 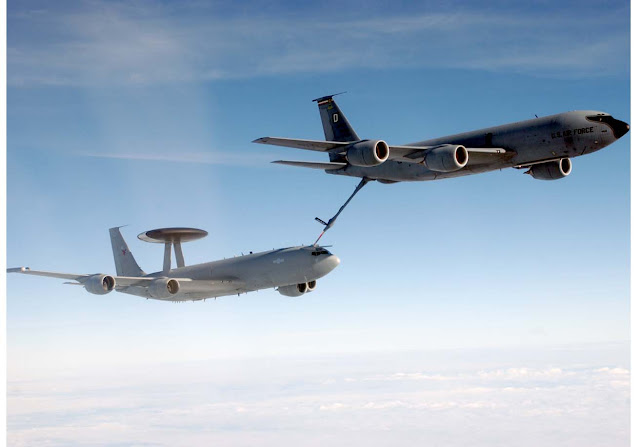 Ideally, modern fighter aircraft should be fully fueled, loaded, in the air - and on-station, ready to be vectored by AWACS or ground control (GCI). 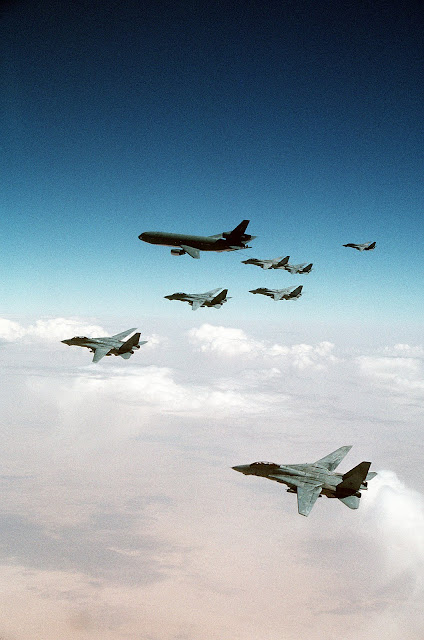 The quicker an aircraft weapons can be brought to bear on an opponent (assuming his whereabouts are known and 'declared hostile'), the greater the effect on the overall combat situation. This is undoubtedly the thinking behind the ‘supercruise’ requirement for F-22 Raptor. In essence, supercruise means afterburner (reheat) flight performance (higher airspeeds), using a non-afterburner (non-reheat) engine power settings, also known as "dry thrust" or "military power." In effect - less fuel consumption for distance traveled/over time:

However, there could be a heavy price for one of “5th generation” hallmark features – their internal weapons bays. Stealth aircraft must (in effect) exchange internal fuel-load-space for internal weapons-bay-space. 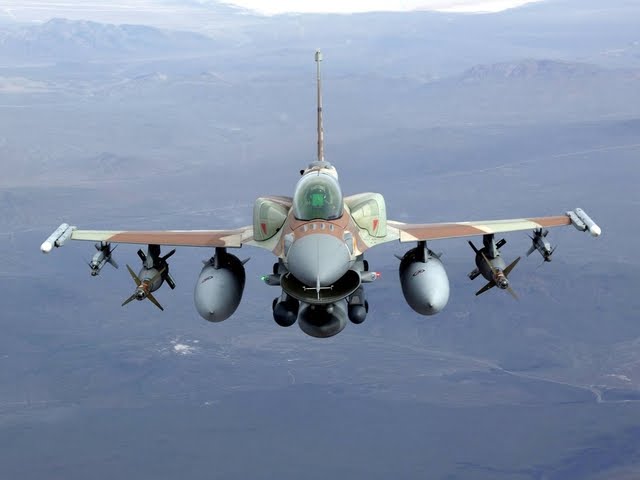 Supercruising may recover 5th-generation-fighter combat radius to some degree - however, may not extend unrefueled total time aloft? 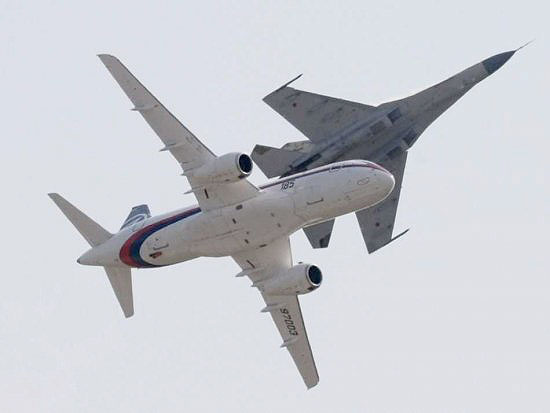 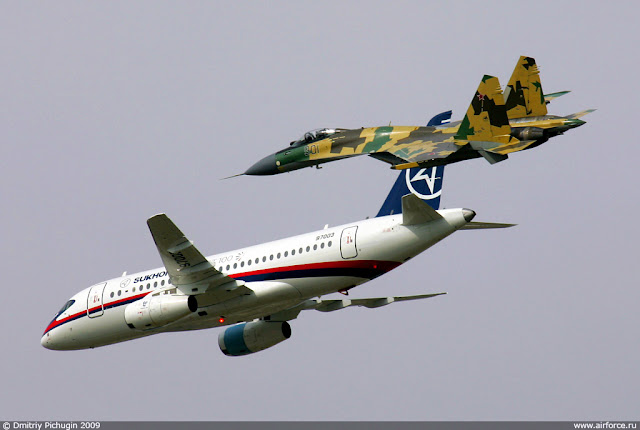 One key to air supremacy has always been the ability to engage, or disengage an opponent - at will. The problems associated with disengagement and withdrawal from an opponent as large as the Sukhoi - are very great. Fighters with the endurance of Flanker - are very dangerous. 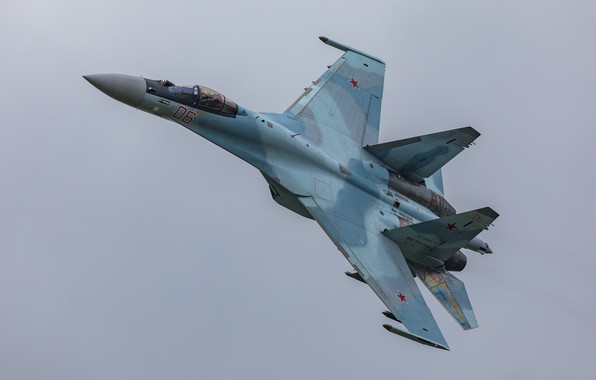 The problem is - if a portion of Flankers survives an engagement, and unless fresh airplanes are coordinated to cover a withdrawal, remaining Sukhoi should - in theory – have the advantage - the combat persistence - to press an attack on opponents whose must disengage and run for home because their fuel situation has become critical.

They could also force NATO fighter to use afterburner after they have hit "Bingo" fuel by loitering out of range of NATO fighter weapons envelope and then attack NATO jets when they turned for home. This would surely result in 100 percent losses of those particular NATO aircraft - simply by being forced into afterburning (reheat) usage alone. Whether the F-22 could change this - remains unclear. 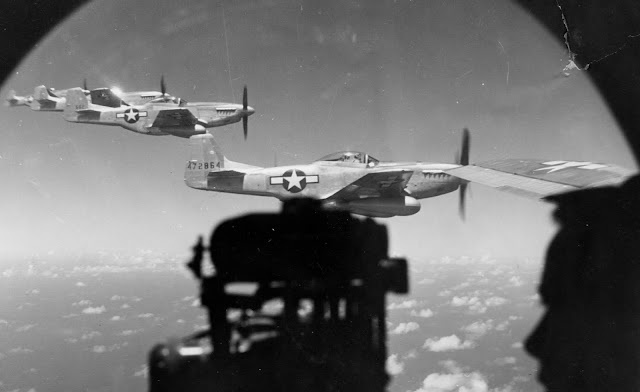 Flanker has better tactical flexibility due to its better combat perisistance. Just like the American P-51 (P-51B/C/D) series of aircraft in WWII.

Indeed this precise scenario has now occurred over the skies of Syria. 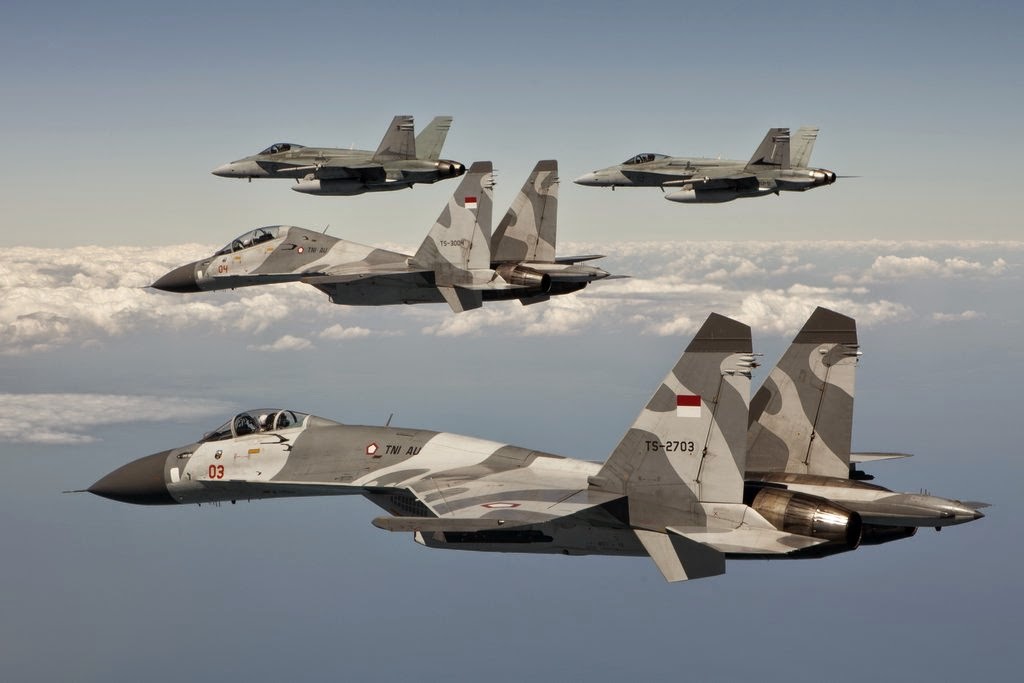 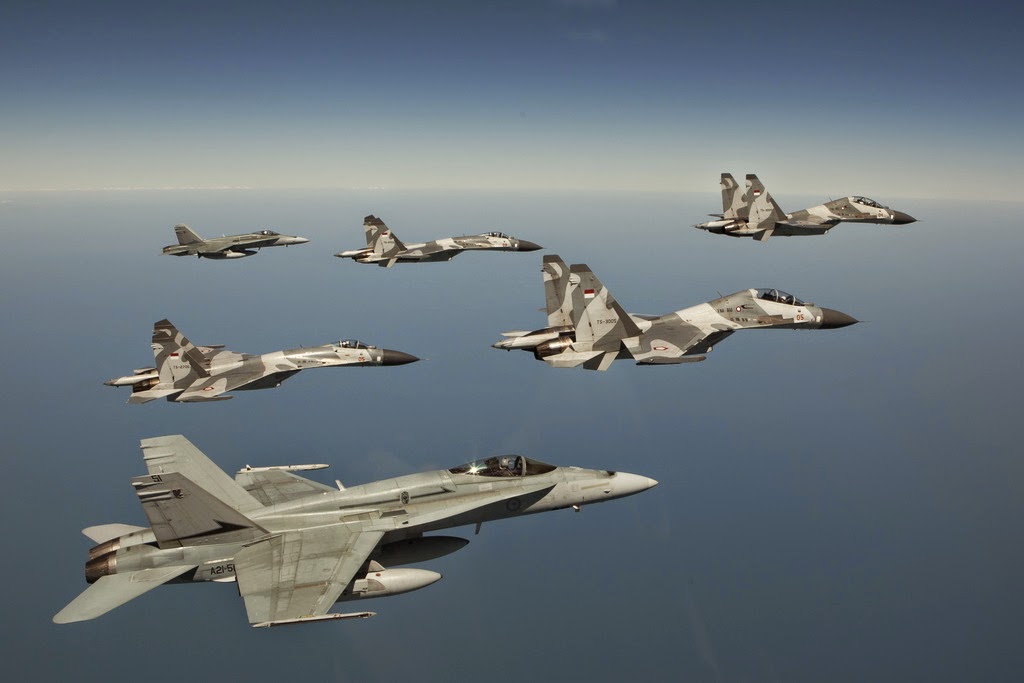 In the power projection discussion, the issue with Western aircraft designs is their fuel fraction. In sacrificing everything on the altar of either 'the minimum size concept' or for stealth, effectively Western fighters exchange size (fuel capacity) for range. This design philosophy results in friendly high-value assets (air-tankers) being drawn in - closer to the combat space (to assist friendly aircraft hitting ‘Bingo’ fuel - or worse) certainly NOT a scenario any air tanker crews would want to entertain. Now compound this problem with Flanker whose unrefueled persistence gives it unparalleled combat flexibility. Because of their fuel fraction, Western fighters are effectively - defensive in nature. Only with sustained supplemental aerial refueling - are they offensive in practice. 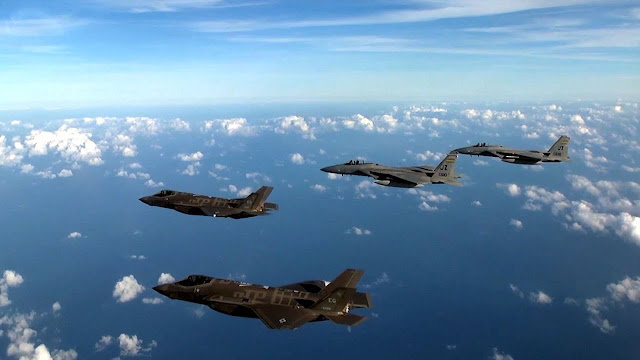 We have arrived at a point in history where the West has - even with decades of vast overspending on defense - achieved airpower parity, not supremacy, and not superiority. 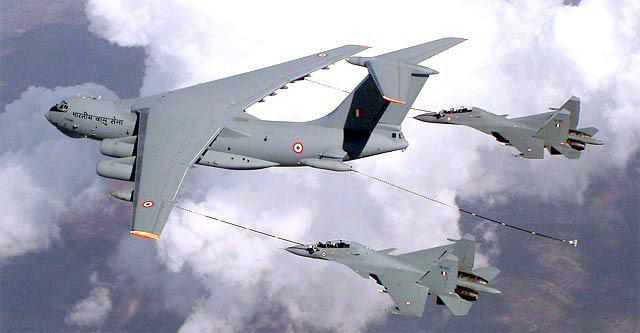 [Below] "Two F-22 Raptors from Tyndall AFB, and a KC-135 from RAF Mildenhall landed in Lithuania today, demonstrating the ability of the USAF to support NATO posture." 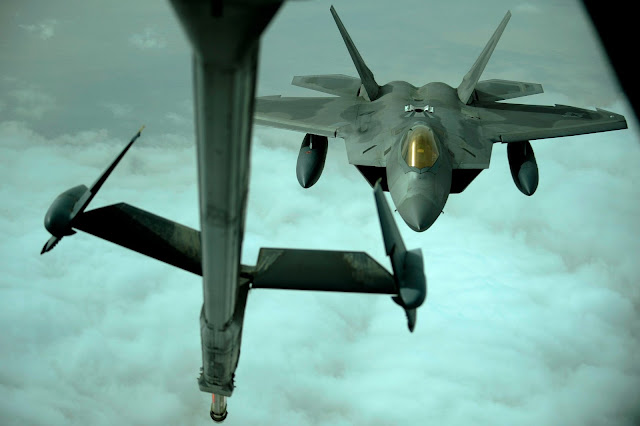 One need only look at the increasing use of longer and longer range UAVs to understand the relevance of the air-tanker and therefore, the combat-persistence discussion. 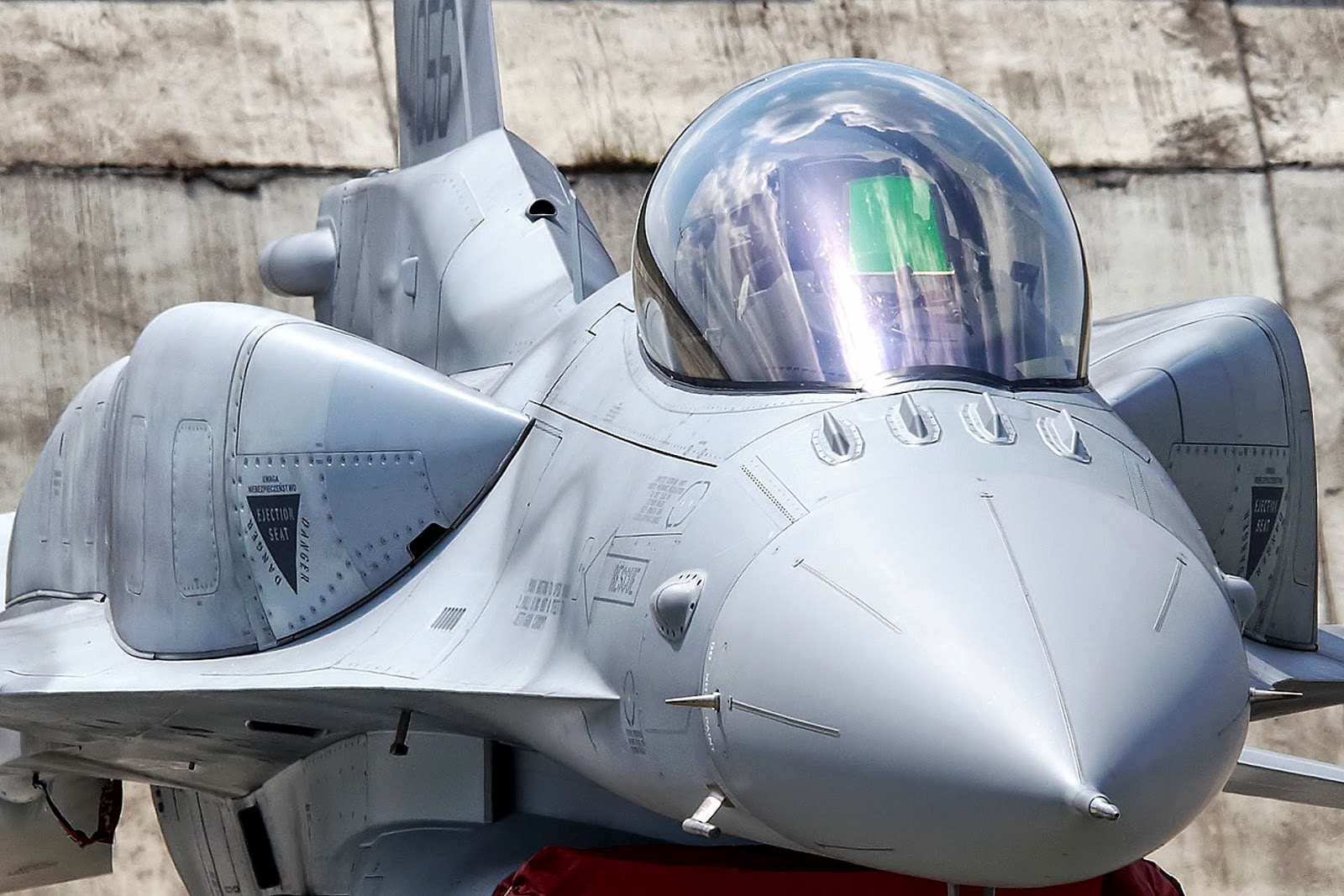 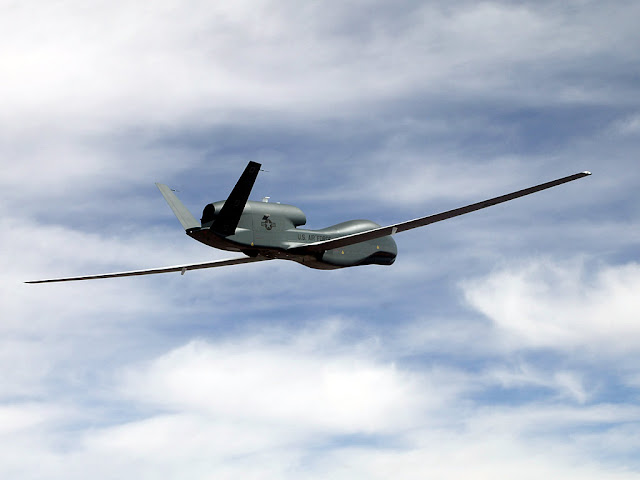