on March 16, 2021
Editors note: The Boresight was envisioned to challenge conventional wisdom. This is easily accomplished by focusing on first-hand combat accounts. We are not mouthpieces of any nation, government, or manufacturer. Because the United States since the end of the Cold War still maintains an enormous standing military while at the same time is unable to find the money to fund basic US infrastructure needs, it is only responsible to ask blunt questions on what we spend on our military. A keen observer would note that we are always looking out for our aircrews.

A new video has surfaced of the Russian Sukhoi Su-35 (Russian: Сухой Су-35; NATO reporting name: Flanker-E) practicing for the MAKS 2017 air show at Zhukovsky Airfield 40 km (25 mi) southeast of Moscow. We began writing extensively about this series of aircraft beginning in 2008-09, and with good reason. Please see the video below. The new point of interest begins at playback point 6:29. For the seasoned observer, these maneuvers are simply beyond belief. Simply watch:

Russia continues to refine and improve this design, and in this incarnation of the aircraft, Sukhoi has [again] moved the global bar even higher for post-stall maneuvering capability - not only for Western fighter aircraft - but other Russian designs as well.

With its independent 3-D thrust-vectoring engines, the Su-35S exceeds by a wide margin the post-stall maneuvering of any other combat aircraft in the world and is one or two generations ahead of any Western aircraft currently fielded in this arena. F-22A is only 2-D thrust vectoring.

Most US-Western analysts assert these maneuvers have no tactical purpose because of the new generation of high off-boresight highly maneuverable missiles that can pull upwards of 40 g. We would remind the reader of the combat debut of the American AIM-9X over Syria. The American-made AIM-9X missile - "the most advanced IR dogfight missile in the world"  fails to hit a 1960 era Su-22 at point-blank range from a perfect 6 o'clock firing position. Western experts should restrain their criticism of super-maneuverability regardless. See the video below, listen carefully to its narration.

When capability portrays the West in a favorable light - it is promoted (the X-31 program). When the same capabilities are exceeded by someone else (Su-35S) - it is dismissed. This is why we began this blog in the first place - to confront this juvenile and myopic narrative out of the Pentagon and elsewhere. What kind of a culture cannot admit when someone else has done something better? To be unable to admit this in a mature manner - is simply a recipe for getting people (our aircrews) killed.

The AIM-9X combat debut over Syria should act as a cautionary tale of why you can't ditch highly maneuverable aircraft.
Your missile shot that was supposed to kill your highly maneuverable opponent - missed - and now he's coming around.
We would also remind the reader that super-maneuverability was built into the F-22 and it appears to some degree into a $1.7 trillion-dollar F-35 program as well. Why? Because it is necessary. The F-22 and F-35 have also be fitted with ejection seats and defensive chaff and flare systems. Why? Because they are necessary.

"One aspect of the engagement does raise questions. Asked if it was a straight Sidewinder shoot down, Tremel admitted it took 2 missiles. The infrared-guided AIM-9X Sidewinder short-range air-to-air missile missed apparently lured away by decoy flares from the SU-22. It was a second radar-guided AIM-120 AMRAAM missile that destroyed the aircraft. The AIM-9X is the latest version of a very well-proven family of missiles and it would not be expected to be fooled by flares or fail against such an obsolete aircraft. " Source

We have discussed at length (at length) about missile hit probabilities under actual combat conditions not exceeding 50%. We almost chuckle when the latest American weapon fails to hit the Syrian Fitter. The US-Navy Super Hornet must fire a second missile round to bring the Syrian down.

The only predictable thing in combat is - the unpredictable. Assume nothing. Assume none of your own equipment will work properly.

Sukhoi in our view has correctly assessed that in a peer adversary environment nothing else will work, and you will need to maneuver your aircraft into firing position to use your cannon.

It is a smart and pragmatic assessment. Hope for the best, but plan for the worst.

Look for a major push by Russia to attempt to disrupt-neutralize the Western investment in BVR. 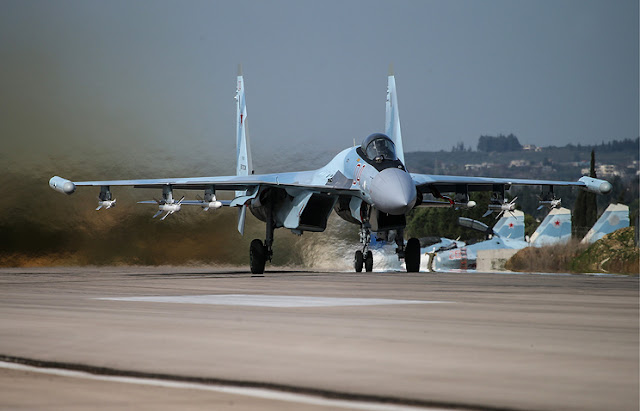 [Above] The Sukhoi Su-35S at Hmeimim Air Base in Syria. The airbase currently operated by Russia. The weapon load-out is interesting because of its mix of medium-range active and semi-active radar homing and IR homing weapons (inner stations) together with helmet-sighted IR dogfight missiles on outer stations. At each wing tip are fitted "Khibiny" ECM pods. The pods are thought to degrade Western radio-spectrum weapon performance (read: AIM-120C series) to acceptable levels. External drop tanks are available but never needed on Su-27, Su-30, Su-33, and Su-35.

US and Russian designs represent philosophical differences in purpose and requirements. The Americans believe in maintaining a high energy state during air combat (Boyd energy management). If this was exclusively historically accurate, then you build a fleet of high-speed fighters with high wing loading (like an F-104). The truth is you need both energy conservation and energy recovery.

Stealth is an attempt to ditch the dogfight by eliminating a blip on a screen (shooting at long range, head-on, killing the targets, and moving to the next). Ok fair enough. Then we would advocate traditional aircraft fighter design with better long-range weapons, better sensors, and better IFF over exotic x-band stealth coatings, internal weapons, carriage restrictions, astronomical cost, and poor mission capable rates (as exotic coatings are sandblasted off during flight).


It is all too easy to watch stealth fighter proponents stumble over their own hyperbole. If stealth fighters are force multipliers - then by [their own] definition we do not need very many of them. This is surely what happened to the F-22A. Stealth fighter proponents are about to repeat their myopic exaggerations for the F-35. So be it. Then purchasing any more is unnecessary. We agree.
There is no argument about the ability of Russia to refine its technologies to outperform "newer more advanced" types. Too many in the United States have invested too much to concede that perhaps they have been out-engineered in some areas - and at a fraction of the cost.

Advanced Flanker technologies may need an export ban. The future can be uncertain, sometimes it is best to hold your cards close.

Especially with respect to India, we would strongly, strongly, strongly urge the Kremlin not (not) export Su-35S technologies to countries like China. There is no virtue to handing over billions of rubles in intellectual and State development costs to the PRC. India has been an outstanding customer and partner, with no copyright violation or J-11B incidents. Besides the technical skill of the Indian Air Force is vastly (vastly) superior to China, and therefore more useful feedback for a state arms supplier. If Su-35S technologies find their way out of Russia, the world would be a much better place in the hands of Indians than in the hands of the PRC. Seriously Sukhoi and the Kremlin need to look at this very carefully.

The AIM-9X is probably a seriously flawed program and DRFM technologies and new RWR will make stealth-fighter missile shots - no better - than legacy fighter missile shots. Supermaneuverability in the F22 is an insurance policy for aircrews (as are expendables and ejection seats) in case things don't go as planned. That the Su-3S exceeds the American F-22 in low-speed maneuverability by a wide (wide) margin has some stealth fighter proponents becoming hysterical.

Expect to see even better Flankers in the future using graphene-enhanced materials.