on August 07, 2018
A new article has appeared on the combat debut of the USAF's Lockheed F-22A Raptor over Syria. The article has something for both F-22 proponents and F-22 detractors. 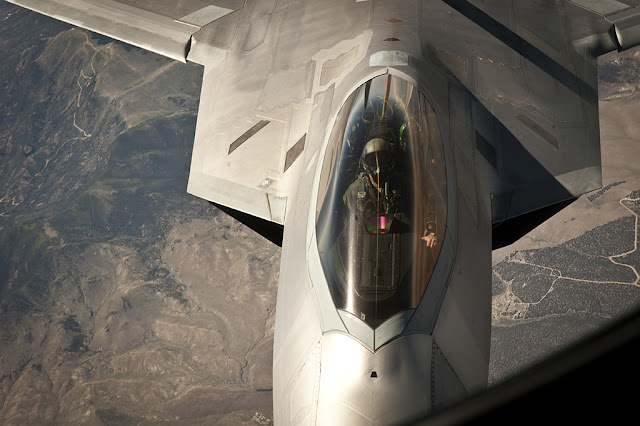 While the article highlights some impressive stealth and supercruise technology - ultimately the F-22 appears hamstrung by its fuel fraction, dependency on in-flight refueling tankers, and AWACS or GC vectoring. At the end of the day, stealth fighter aircraft are becoming increasingly vulnerable to low-frequency radars operating in the VHF and UHF bands. Please see Source. Photos selected here were not in original article.

"Inside The Cockpit: Flying The F-22 Against Islamic State In Syria"

"Cruising in the midnight sky above western Syria, “Crash” could scarcely believe the lethal Soviet air defenses below had no idea he was there. It was September 2014, the opening salvo of U.S.-led airstrikes on Islamic State group targets in Syria, and Crash was flying the stealth F-22 Raptor on its first combat mission.

Crash, a lieutenant colonel who told his story on the condition that Aviation Week identify him by his call sign, was not supposed to be there. It was the last week of his six-month deployment to the Middle East, and the F-22s were configured to go home with external tanks loaded. Crash and his squadron had spent the previous months on standby, waiting for orders as the U.S. and coalition partners weighed whether to move forward with airstrikes in Syria.

Since that night almost three years ago, the F-22 has been crucial to U.S. and coalition operations in the volatile country. The Raptor’s integrated avionics allow pilots to focus on making tactical decisions instead of trying to gather information, while its unique supercruise capability lends added flexibility, say pilots. And of course, the aircraft’s stealth abilities enable the Raptor to fly with impunity into the denied air space above western Syria, where the regime has robust integrated air-defense systems (IADS)—primarily Soviet surface-to-air missiles—that can potentially track and kill allied aircraft.

But that first night did not go smoothly. The mission was broken up into four strike packages assigned to four different target areas in the Middle Eastern country. Crash was one of four Raptor pilots designated to help take out targets in western Syria, where the IADS posed the biggest threat. He and his wingman were to sweep the area for surface and air threats, then take out an Islamic State group command-and-control facility; the other two-ship was to escort the F-15 Strike Eagles to and from their targets. The Raptors were loaded with both air-to-air and air-to-ground missiles. 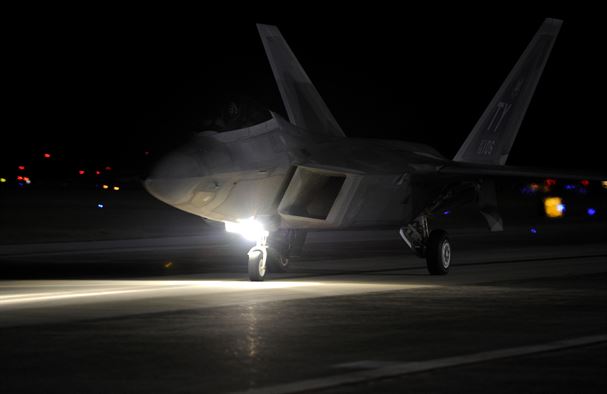 From the start, things did not go according to plan. The first Strike Eagle slated to take off had an engine malfunction, shutting down the runway for 20 min. Trying to compensate, all the aircraft took off immediately, causing congestion above the airfield. The winds were stronger than expected, making it difficult for air traffic control to guide the F-22s up to altitude, so they were burning gas and flying slower at a lower altitude than planned.

“All these things snowballed, so by the time we got into Iraq, approaching Baghdad, we realized there was no way we’d make our planned time on target,” says Crash.

He knew he and his wingman had to make up for lost time. They decided to supercruise, climbing to 40,000 ft. and Mach 1.5 without using afterburners. The stealth aircraft cruised across Iraq and Syria for 15 min. to the target and released their bombs—GBU-32 1,000-lb. GPS-guided JDAMS—right on time.

“We went from being last in the train, furthest behind, farthest to go, to first people on station, thanks to the capability of the F-22,” says Crash.

But the night wasn’t over. Crash and his wingman headed out to gas up back at the Iraq-Syria border for the return trip to base. About halfway home, they got an unexpected call from the air battle managers: “We need you to fly back into Syria.” The Strike Eagles had not struck all their intended targets, and the Raptor was needed to escort a B-1 back into enemy territory in just a few hours to finish the job.

Crash hadn’t planned for this. The Raptors had just enough gas to make it home, but not a drop more. And on top of the fuel problem, he now had to deconflict from the next planned strike package that was already rolling in for another round of airstrikes.

“All of our fuel planning consisted of getting to and from the airspace. We had some contingencies in case we needed to fight in the airspace, but the reroll portion of it was completely off script,” says Crash of those nerve-racking few hours. “We had no idea where our gas was going to come from, where our tankers were located, who we were escorting, and we didn’t know where the target was.”

After some coordination, Crash sent the other two-ship of Raptors home, and he and his wingman headed back to the tanker. They had to hit three tankers before they could get all the fuel they needed, and then they flew back over the border into Syria.

Mercifully for Crash and his wingman, the rest of the night was uneventful. The B-1 hit the target and the package headed home. The surface and air threat was quiet. Any time Crash got worried about deconfliction, he and his wingman would climb up to 40,000 ft. where they could be out of the way. In all, what was planned as a 6-hr. mission ended up clocking in at 9 hr.; it was almost midday on Sept. 24 before Crash made it back home.

“There were a lot of emotional roller-coasters throughout the flight, but in general it went much smoother than we anticipated,” Crash says of the mission.

The Raptor pilots from his unit flew a total of three missions into Syria before they got orders to pack up and go home, soon to be replaced with another F-22 squadron. But though Crash’s time in Syria was brief, the impact of his mission was felt worldwide. Almost a decade after the Raptor entered service, its performance in combat did not disappoint—the fighter hit its intended target on time, and went undetected throughout the entire flight. 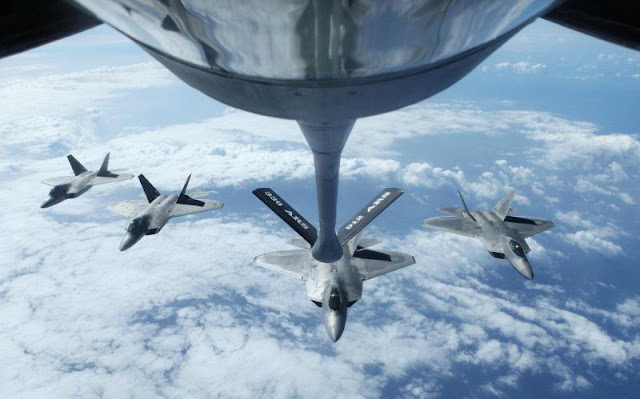 “It’s a little nerve-racking as well, because stealth is not always 100%, so you have to be very cognizant about what’s going on around you,” says Crash. “But once you get in, there the jet’s telling me exactly who’s looking at me, and the reality was I didn’t have to worry about anybody.”

Overall, there have been no major surprises during the Raptor’s few years in Syria, says Col. Pete Fesler, commander of the 1st Fighter Wing at Joint Base Langley-Eustis. The Raptor pilots’ extensive training program has served them well in combat, and the more missions they fly the more comfortable they get, he notes.

“Because we train to these incredibly complicated, high-end, contested, degraded environments, when you go to a more permissive environment like they were on in that first combat mission in 2014, they had excess capacity in their brains to be able to work through those new challenges,” says Fesler.

But as technology advances, the Air Force and Lockheed Martin have plans to modernize the 1990s-era airframe. Lockheed has developed a new low-observable (LO) coating that is expected to last longer and reduce maintenance on the aircraft, and is currently repainting the fleet’s engine intakes.

At the same time, the company is working on enabling the Raptor to transmit Link 16 signals—currently the aircraft can only receive Link 16—and fielding Increment 3.2B, a new software load that will allow the F-22 to take full advantage of the AIM-9X and AIM-120D Amraam missiles.

The cockpit itself is “pretty modern,” says Fesler, and he sees no need to change it to look more like Lockheed’s newer stealth aircraft, the F-35. The F-22 may eventually get a helmet-mounted display, much like the F-35’s, which projects information on the helmet’s visor rather than on a traditional heads-up display.