07-Jan 2020: At 01:30 hrs local time Iran fired from Iranian territory at least ten Fateh-313 short-range ballistic missiles and perhaps five to six Qiam medium-range ballistic missiles at two US bases in Iraq in retaliation for the US killing of Iranian general Qasem Soleimani days before.
US bases hit were:
03-Mar 2021: New video has been published of the attack on Al-Asad Air Base: 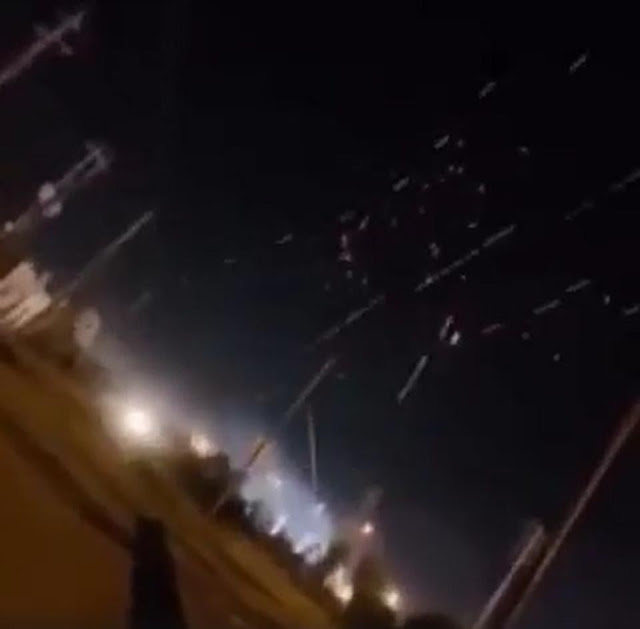 This was followed up with a 107mm rocket attack from Iranian militia elements (Hezbollah) minutes later. The U.S. initially claims no casualties were reported on either base from any of the missile attacks however, soldiers were treated for blast concussion.

The US also claimed its C-RAM and Centurion CIWS air defenses downed several of the Iranian missiles, however, there is no evidence for this claim, reminiscent of the false claims credited to the Patriot missiles in 1991 of intercepting Iraqi SCUDs. There is also a second claim from the US that it did NOT attempt to intercept/shoot down incoming missiles - the Pentagon needs to make up its mind on events - we shall see. 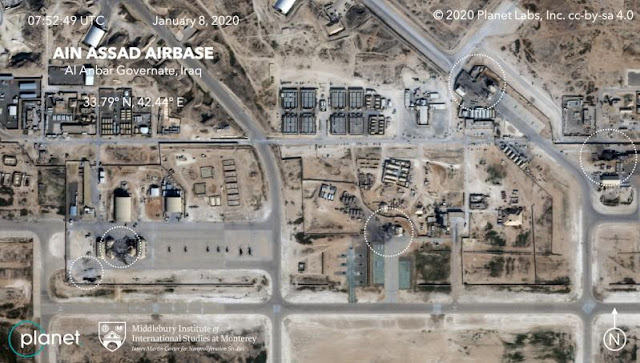 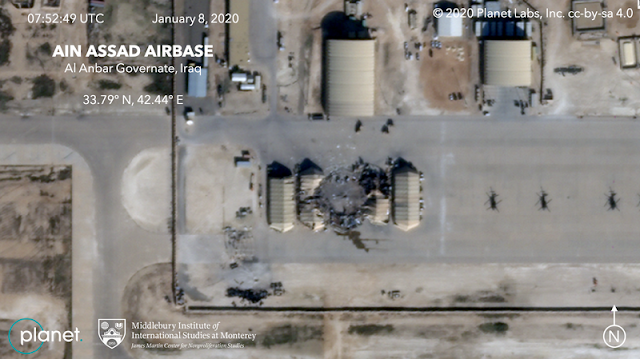 Some Iranian missile hits appear highly accurate. [Below] Missile hits appear to be a straight diagonal targeting line from hit 2 to hit 9. However, hit 1 and 8 do not really look like malfunctions per se, as they are too close to base structural and material assets as well. (From ACIG). 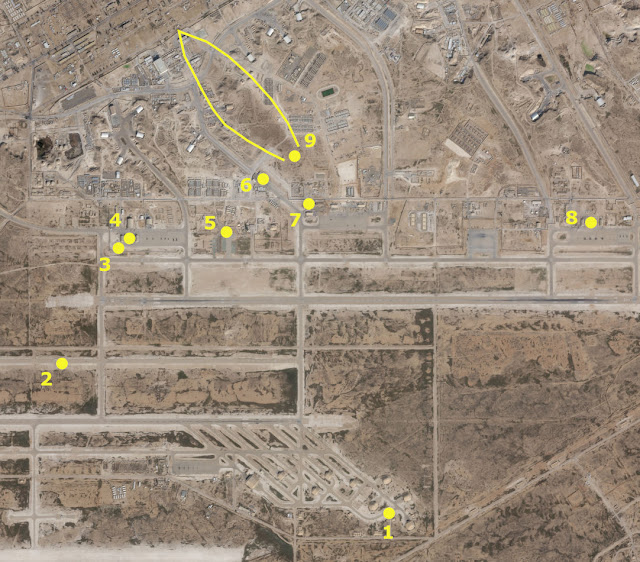 14-Jan, 2020: [Below] New images have appeared of Al-Assad AB. Apparently, U.S. troops at Al-Asad had only 15-20 minutes of warning of an Iranian counterattack strike. Iran warned Iraqi officials before the strike. Missiles hit living quarters. 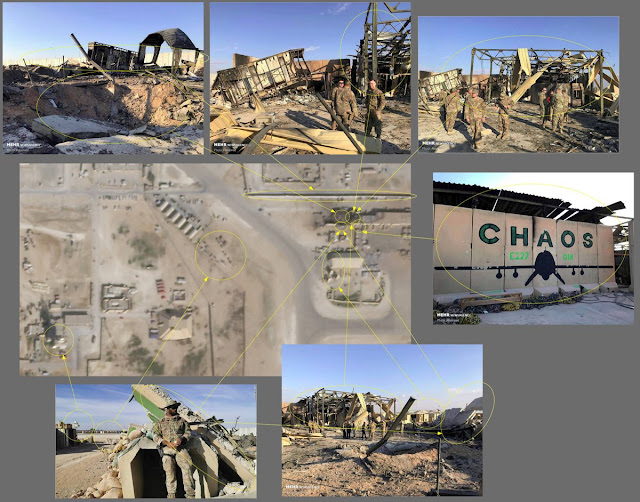 While we are no friends of the Iranian regime, the precision and material damage inflicted on American installations together with injuries with just a handful of Iranian missiles - should be taken as an ominous warning of what is to come if a major confrontation were to occur between the US and Iran. The Americans are not configured or prepared to operate without air supremacy - something the Iranian mobile rocket and MRBM forces take away. US forces and installations in the region are for all intensive-purposes totally exposed with no (no) defense against Iranian missile fire.

All (all) US Central Command expeditionary forces in the range of Iranian missile fire would see military material and personnel losses not seen since WWII or the Korean War. Something the US military, its handlers in Washington, and current American political discourse - can not stomach. Most Americans can not even find Iran or Iraq on a map. We have maintained for a long time that against a true peer or near-peer adversary - huge swathes of US "military capacity" are effectively a paper tiger.

Separately a Ukrainian civilian 737-800 airliner was shot down by Iranian air defenses over Tehran the same evening as the attack on American bases, killing all 176 passengers and crew. Reportedly civilian air traffic over Iran was allowed to operate normally - so why Ukraine International Airlines Flight 752 was engaged is unclear. In all likelihood, it is simply a dreadful mistake linked to compressed timeframes in the fog of war, reminiscent of the USS Vincennes accidental downing of Iran Air Flight 655.

We are no fan is the Iranian regime, however, with the recent publishing of the Afghanistan Papers by the Washinton Post, we have become highly suspicious of US assertions and motives presently, especially with respect to the timing and justification for the killing of Qasem Soleimani by American drones. We shall see.