on September 22, 2020
15 Sept 2020: "U.N. war crimes experts urge Turkey to rein in rebels in Syria." Source
31-July 2020: Indeed as we had concluded months ago, now the Office of Foreign Assets Control (OFAC) under the US treasury Deptamnat, has identified that a major financier for Daesh (ISIS/L) - is in Turkey.

16-July 2020: As predicted things are heating up again in Syria. Syrian government forces are applying increased pressure on Idlib province. The incursion by the Turks will not be allowed indefinitely. The Turks will get no help from NATO because of veto power by the Greeks. Russian aircraft (as well as Turkish drones) are aloft.

05-Mar 2020: Ceasefire announced. Apparently both either content or frightened of continued escalation. The bottom line, HTS jihadists remain unscathed by the Turks in Idlib province, and so the Syrian government after some preparation will move to retake this area again.

A keen observer will note that the Turkish military's massive incursion into Idlib province of Syria has not included confronting and neutralizing HTS (Hay'at Tahrir al-Sham) or any other Jihadist groups - something the Turks could easily do. This deliberate inaction by Ankara constitutes tacit support of Jihadist and radical Islamists on Europe's doorstep.

This will require a containment policy by other responsible state actors upon Turkey that should include suspension from NATO until such time as non-authoritarian liberal-democracy emerges in Ankara. This must be the minimum prerequisite for NATO membership regardless.

According to this author, Russia and Turkey are apparently attempting to operate under these agreed-upon rules between Ankara and Moscow. Whether or not this can be maintained is far from certain, and appears to be under heavy pressure.

1) Prevention of clashes between the Russian and Turkish militaries.
2) Freedom of movement for Russian air forces against terrorist groups in Idlib.
3) No-fly zone for Turkish air forces over Syrian airspace.
4) Coordination of movement(s)/deployment(s) of Turkish units in Syria with Russian military command.
5) Joint Russian/Turkish patrols on agreed routes.
6) A ban on the transfer of MANPADs to any non-state actor. 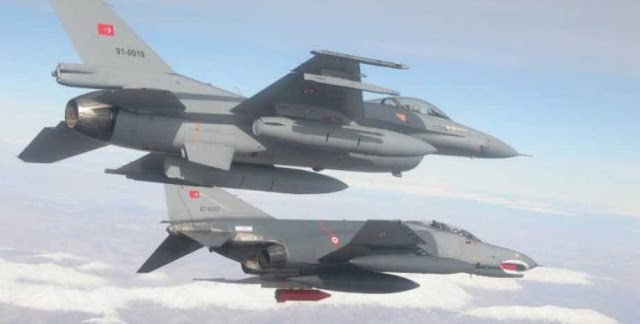 The parties may have already broken number 1 and number 4 with video of Turkish troop firing MANPAD at Russian Su-24 and well as a Russian airstrike that killed over 30 Turkish troops. Russia already has no confidence in 1 and 4 as Russian Su-34 aircraft have been seen using flare expendable countermeasures to counter the new MANPAD threat introduced by the Turks. The Russian also assert that Turkey has not delineated or moved their forces away from Jihadist groups.

Fears of the Turks being granted NATO article 5 protections are low as the Greeks would never agree to such a proposition. Granting article 5 protections to the Turks would fracture NATO regardless, as the majority of the populous in Germany, France, Spain, and Italy do not seek or want a war with Russia regardless.
The larger concern here is whether the Turks and Russian can manage any escalation. Surly Iranians in the form of the IRGC is going to demand Russian air cover at some point?

"The North Atlantic Council, which includes the ambassadors of all 29 NATO Allies, will meet on Friday 28 February [2020], following a request by Turkey to hold consultations under Article 4 of NATO’s founding Washington Treaty on the situation in Syria,” NATO said in a statement."

There appears to be some ambiguity with respect to Article 5 and Turkey?
"It is not clear whether Ankara could invoke Article 5 if its military were deployed on Syrian territory. The former NATO general and Bundeswehr commander Harald Kujat told the mass-circulation Bild newspaper that "if Turkish troops were to conduct operations in Syria without Syria's permission and without a UN mandate and then be attacked this would never amount to a casus foederis (Article 5)."
Source

08-Mar 2020: Information filtering in on some weapons system performance [ACIG]. 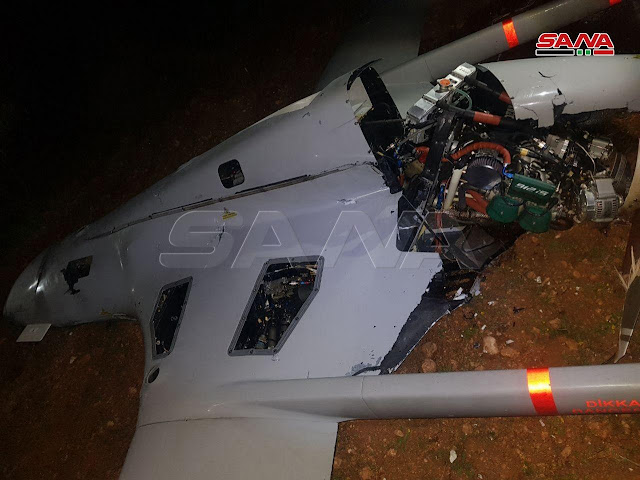 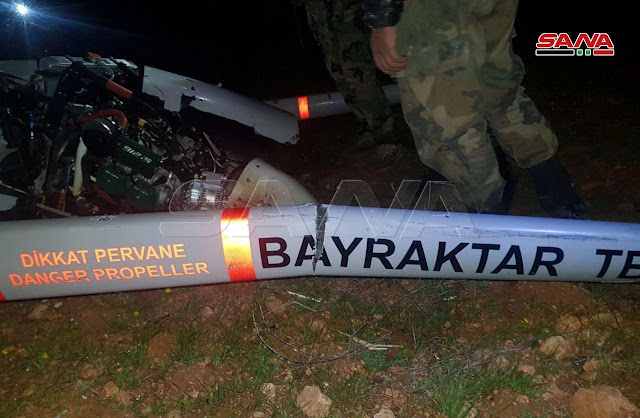 28-Feb 2020: This video claims to show the Turks using drones to attack Assad forces. This at odds with Russia closing the airspace over Idlib. What happening in Syria right now remains unclear.

[Below] Vide claims 37 Turkish soldiers killed, 55 injured in these raids in Idlib. The figure is difficult to verify.


27-Feb 2020: This video constitutes an act of war against the Russia Federation.

25-Feb 2020: Turkish ANKA-S armed drone is down over Idlib, Syria. How the drone came down remains unclear, however, most likely shot down (or jammed) by Syrian/Russian forces.  The drone was carrying Roketsan MAM- L laser homing munitions.

22-Feb 2020: "Turkey planned a major operation to Idlib dedicating a now estimated 15k troops and 2k tanks/vehicles. This operation was obviously planned taking airstrikes into account and going forward without NATO support. If western support materializes it would be a big unplanned bonus." Source

Analysis
"According to video and photos posted online, Turkey has an impressive arsenal now in Idlib and in supporting positions inside Turkey. This may include an Aselsan Mounted Stinger System called Atilgan which was also spotted near the border. It is used for short-range air defense. M60s and Leopard 2A4s are also on the way or already there. Spotters also saw T-155 Firtina self-propelled howitzers and T-122 Sakarya multi-rocket launch systems which are made by Roketsan. Also Turkish BMC Kirpi, a mine-resistant armored vehicle, and FNSS amphibious combat vehicles called ACV-15s, Otokar Cobra IIs and other vehicles were seen. Some of the M60T tanks that have been pictured on social media, based on visuals from both the Turkish side and regime airstrikes, are alleged to be from a batch of 170 upgraded M60s Turkey built and upgraded with Israeli contracts in the early 2000s. The same tanks were reportedly spotted last year in Turkey’s offensive near Tel Abyad.

The constellation of armored vehicles points not only to Turkey’s commitment but also the chance it wants to see how well its weapons systems work against the Syrian regime and Russian air force. So far Turkey has mostly husbanded its armor on the border when sending Syrian rebels to fight Kurdish groups in 2018 and 2019. Turkey has preferred to use its air force against Kurdish groups, but so far the airspace of Syria has been closed to Turkey. Russia and the Syrian regime only opened Syrian airspace so Turkey could attack the US-backed SDF in October 2019 and the Kurdish YPG in 2018. But then the regime and Russia closed the same airspace. Now Turkey must see how its sophisticated weapons systems, linked to its partnership with NATO, will perform." [ACIG] Source

22-Feb 2020: As we have predicted back in January of 2019. Recep Tayyip Erdoğan and NATO have now made the same mistake in Syria, that Presidents Johnson and Bush made in Indochina and Iraq. But this time NATO and Turkey have stumbled into a direct war with a nuclear superpower for dubious or even zero authentic interests for either the Turks, Washington or NATO that reaches the level of war with Russia. To perfectly frank, Recep Tayyip Erdoğan, a NATO member, is simply a brazen thug. Nothing more. See here. 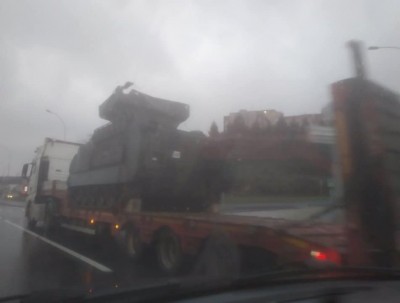 [Above]  Seen moving into the Idlib province. Formal Turkish Air Defences in the form of M113A2T2 with an automated firing unit for FIM-92A Stinger MANPAD. [ACIG].

[Below] 2 Turkish M60TM tanks were destroyed in Neyrab by VKS Su-24.

11-Feb 2020: Update [below] A SyAAF Mi-17 is shot down over Idlib by Salafi Jihadist rebels or their backers (the Turks) using a MANPAD. 14-Feb 2020 There has been a second employment of MANPAD against a regime helicopter now. It is almost a certainty the Turks who have introduced these weapons.


A larger concern here is if the Turks, a NATO member,  supplied upgraded MANPADS to HTS (Hay'at Tahrir al-Sham) or other Salafi jihadists in Syria.

A story has emerged that a THK F-16 downed the SyAAF Mi-17 with an AIM-120B. This was a cover story to obscure the fact that it is almost certainly the Turks - a NATO member - that have supplied Salafi Jihadists - MANPADs. Even if its not the case - that means Turkey a NATO member is now shooting at the Russians in Syria. Unlike the VKS Su-24 downing by the Turks this is not going to end well.