on August 10, 2020
25-May 2021: Private contractor Mirage F1 crashes into Clark County Nevada neighborhood, killing the 43-year-old pilot.
The United States Air Force is moving ahead with plans to use private aggressor adversary "Red Air" services with a contract worth up to $6.4 billion dollars. The contact to outsource this training was announced this past October 2019. The contract has been awarded to seven private companies. These include Air USA, Airborne Tactical Advantage Company, Blue Air Training, Coastal Defense, Draken International, Tactical Air Support, and Top Aces Corp. 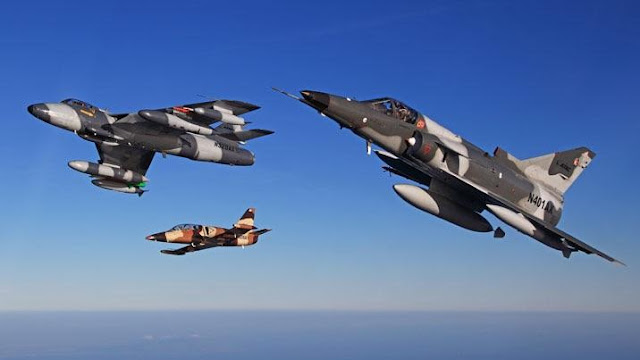 The contracts are purported to provide more realistic training than can currently be offered for the price of a traditional Fighter Weapons School.

We decided to take a look at these private firms to see what kinds of threats exactly were being offered to American aircrews. We did not focus on Forward-Air-Controller training as this can be done with older COIN aircraft like OV-10. We also have no business relationships with any of these entities whatsoever.

With respect to Air Combat Training aircraft offered in the syllabus, the bulk of our findings were somewhat alarming, to say the least. Some of the contractors offer adversary aircraft like Mirage F1, MiG-29, F-21 Kfir/South African Cheetah, Northrop F-5, A-4N, and in the future, the F-16A. Given the number of operators of these aircraft types around the globe, this might be okay.

Top Gun training that began in 1969 with A4 Skyhawks did prove instrumental in reversing the poor air combat history of American airmen over Vietnam. We think similar results could be achieved today with the above-listed private aircraft.
However, these contractors also offer a mishmash of old or non-applicable threat platforms that border on private civilian-sport aircraft including Mk-58 Hawker Hunter and L-39 Albatros. Presumably, these will be used for close air support training?
What are our F-15C/D/E, F-16C/D, F-35A, F-22A, and A-10C aircrews suppose to learn from an
aggressor L-39 or a Dornier Alpha Jet, we are not sure. The PLAAF, KPAAF, or the IRIAF are not going to put civilian class sport-aircraft into action against American forces in the air or on the ground.
We would much rather seen private pentagon contractors secure aircraft like the Chengdu J-7, the Chengdu J-10, the Shenyang J-11a, the F-4D/E Phantom II, and the Su-25 Frogfoot as part of their threat platform fleets. Also, the entire Su-27/30/35 series is glaringly absent from all these contracted adversary syllabi.
Conversely, the Saab JAS 39 Gripen would probably be a better threat aircraft than old Israeli Mirage III/5s and Czech L-39s.

We remain very guarded about outsourcing air combat proficiency to global private contactors. Air combat proficiency is a national security keystone that countless American aircrews collectively paid for with their lives to learn. Not to mention untold amounts of taxpayer dollars to master in the process. This knowledge should be retained inside US government walls and to protect the taxpayers' investment. Global private contractors will glean invaluable insight into American aircrew and force strengths/weaknesses and cleaver lawyering could then make this information for sale globally to the highest bidder.
We think the Contracted Adversary Industry may have a place, but that place is extremely limited to very (very) basic training and then should be firewalled off from Fighter Weapon School "Top Gun" levels of operational training. There is no virtue in giving away the keys to the candy store - keys of proficiency and knowledge that countless American aircrews have paid for with their lives.