14-Jan 2014: There are reports that the Indian Air force (who is helping sponsor the development) is unhappy with T-50 own radar performance (air intercept radar) and reportedly a host of other issues as well.

Stealth aircraft require jamming support aircraft to accompany them so they can be stealthy. A stealth fighter is simply a design trend that will burn out (like the 1950s-60s era 'all missile fighter without a gun did) in another decade or so. We'll have to see what the Russians do with T-50? It appears to have worse cockpit visibility than the Fulcrum and Flanker series of fighters. If fielded T-50 will certainly only be as a supplement to the other modernizing fighter fleets in Russia.

At the end of the day, stealth aircraft are becoming increasingly vulnerable to low-frequency radars operating in the VHF and UHF bands. 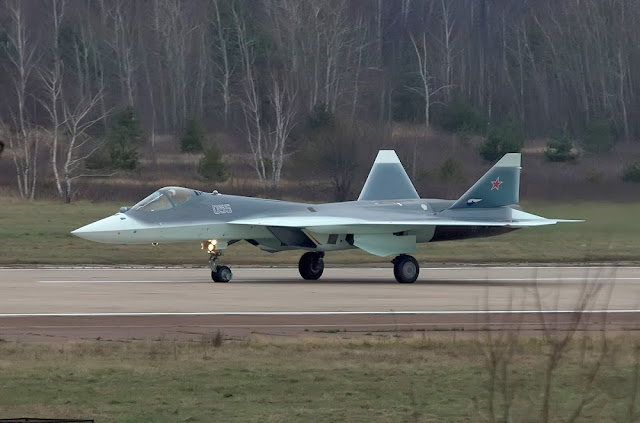 [Above] Photos of the 5th aircraft in the T-50 test program have appeared. Note new color scheme. OLS-IRST station remains unchanged - as (we) predicted.

31-Mar 2013: It is now clear that the Russian Sukhoi PAK-FA fighter is not to be an all-aspect stealth machine but rather a counter-stealth machine. While it has some stealthy features (just enough) to exploit the poorer target-detect performance of opposing stealth-fighters only equipped with radar (like F-22A) T-50 is also equipped with some decidedly “non-stealthy" sensors like OLS (and second spherical ball behind the cockpit) to detect/attack F-22 outside the radio spectrum. This misread of T-50 has produced some bizarre statements/analysis on the PAK-FA from Western stealth-fighter proponents, including:


"The Electro-Optical System (OLS) turret employed on the prototype is likely the Su-35S OLS, and is incompatible with a VLO design, as it is a broadband spherical reflector. We can expect to see a faceted VLO fairing similar to that designed for the canceled F-22A AIRST (Advanced IRST) in a production PAK-FA configuration.”

These types of observations by western stealth-fighter proponents - are nonsense. The western argument prefers the Russians to copy the west (with all aspect stealth) to validate the overall F-22 concept (that the Americans have yet again set the design trend(s) for high visibility military technology). Otherwise, the western argument will conclude: "they can't because its too expensive." The hard facts are that F-22A will never reach supporters expectations due to basic physics - that have nothing to do with program cost(s). 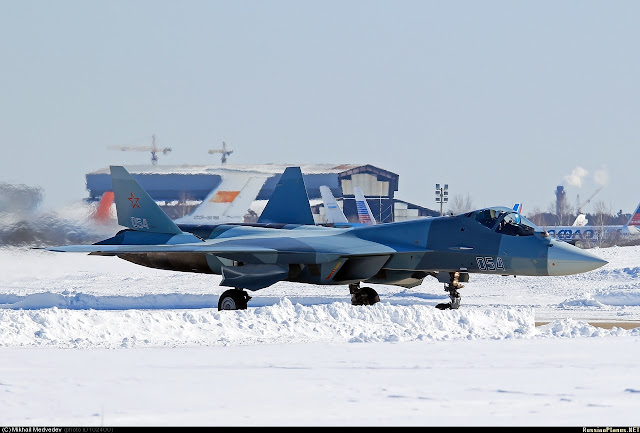 [Above] Good photo of the 4th PAK-FA  prototype (T50-4) which appeared in the summer of 2012. This was somewhat of a surprise since at the time of our earlier writings, there were rumors of development problems on the first prototype load-bearing structure and a redesign of the structure may have been required pushing additional prototypes - out to 2013. On 17-Jan, this aircraft "054" reportedly completed a long-distance one-way flight from the Komsomolsk production plant to the Zhukovsky military test center (near Moscow) covering some 7,000 km (4300 mi). Impressive.

[Below] These types of renderings began to appear after T-50 was unveiled. Note the artist has deleted the IRST in the false belief that Sukhoi would optimize PAK-FA for the radio spectrum (and remove radio reflectors). The movable foreplanes on T-50 are also not "compatible "with radio-spectrum optimization (VLO). 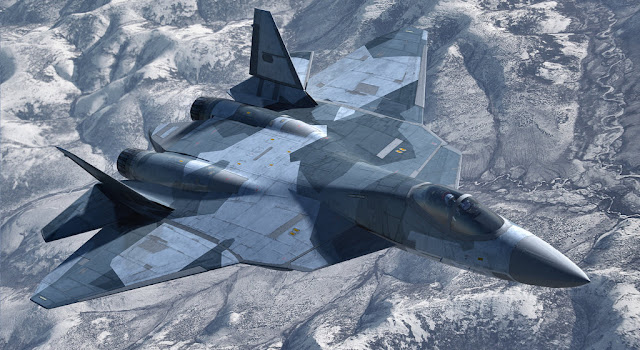 The program reportedly has stayed under $10 billion dollars. The American DoD should take note regarding its own cost controls for combat aircraft. Even as a percentage of GDP vs defense spending – it’s all real money. The right equipment is not necessarily the most expensive.

Looking at these reported avionics/sensors for PAK-FA, the aircraft will be a formidable opponent for F-22A aircrews. Nothing says these systems could not be adapted to Su-35S as well.

[Below] Please note unique moving-surfaces blended into leading-edge wing-roots (above each engine intake), appear to be at work. We also see no use of reheat/afterburner. Bottom and inside engine-louvers are also visible.

New photos and video have become available since the time of this original writing, and a second prototype (T-50-2) has appeared along with a new IRST (OLS) unit: 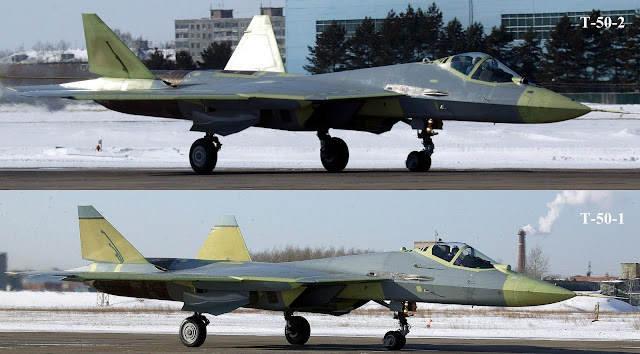 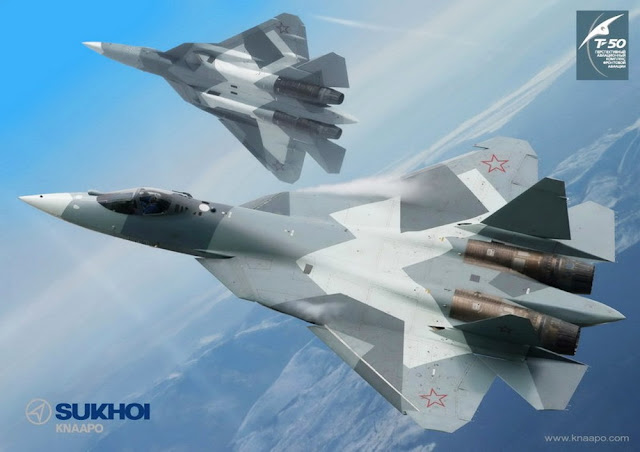 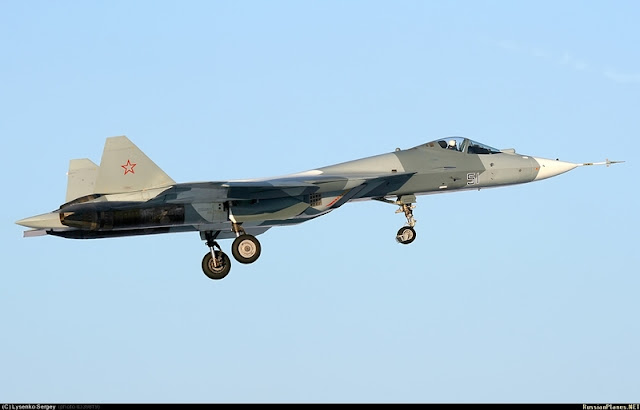 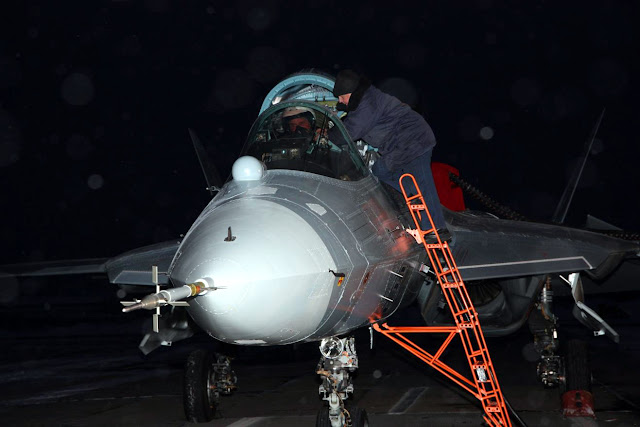 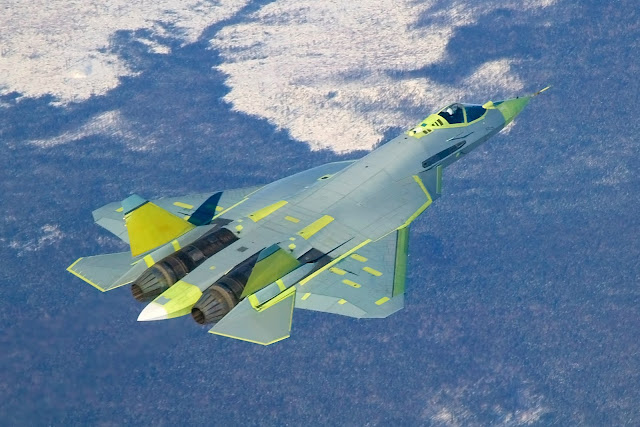 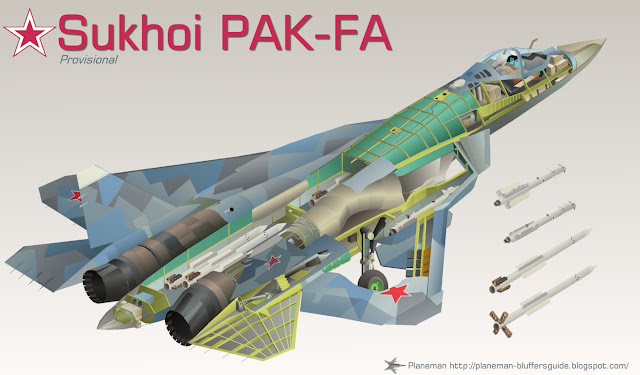 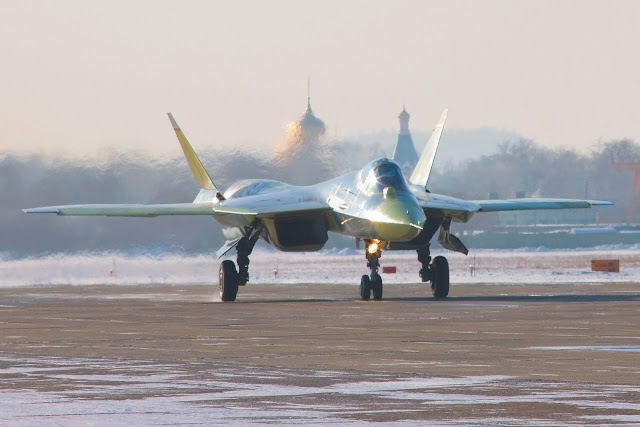 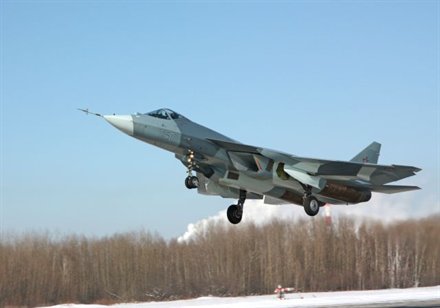 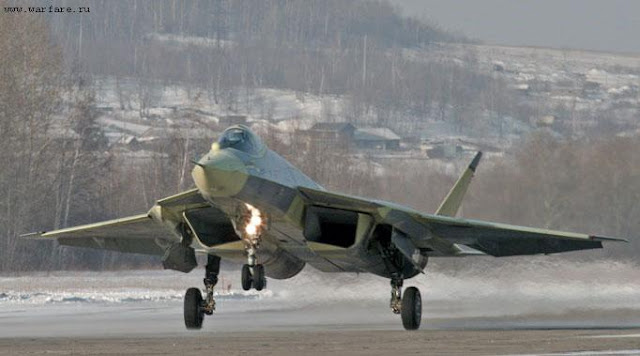 [Above] An infra-red search and track (IRST) sensor is clearly visible on the first prototypes as well as [below] a Flanker-like 'louver-system' at the bottom of the engine intake on each engine nacelle. This would seem to indicate 'stealth' as not the – primary design concern? This is consistent with Russian sources that T-50 was not (not) intended to be an all-aspect Stealth design. There appear to be moving/movable surfaces (canards?) where the leading edge meets the fuselage – just above each engine intake. 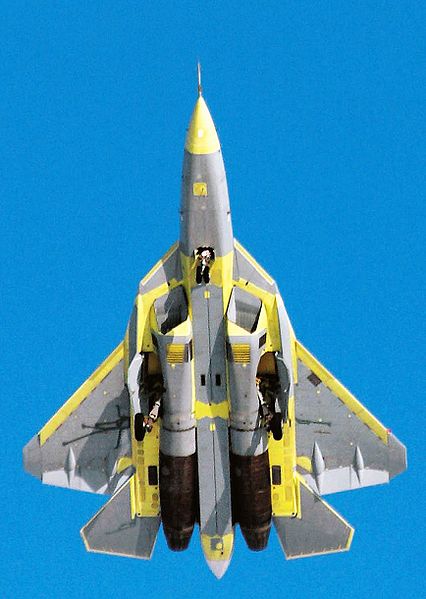 As more information has become available T-50 may incorporate two additional thin radar panels along (and/or inside) the leading edge of each wing (also seen on advanced Flanker variants). Again, multi-sensor integration (IRST) has been retained. Together with its round conventional exhaust nozzles could classify the T-50 RCS as an aircraft 'defensive in nature.' Our view is T-50 may incorporate just enough stealthily features to give an F-22 detect/targeting problems.

There is growing evidence that the American F-22A exhibits undesirable own-radar targeting performance under some/all/specific operational conditions. We have alluded to this (for some time) as an inherent probability for an overly stealthy air-combat fighter which lacks multi-sensor (wide electromagnetic spectrum) primary targeting. 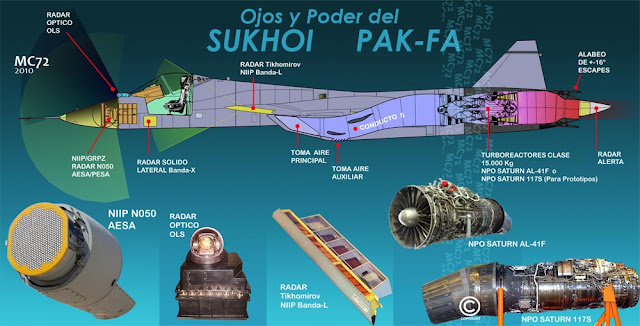 The careful review of video footage should give some insight into T-50 construction methods and indeed the statement was made that T-50 IS important as a manufacturing vehicle for Russian aerospace. Interestingly a second smaller sphere is visible behind the cockpit which is reportedly an "IR detector."

[Below] T-50 appears to have some similarities to both models at center and the far left?

Reports are still a matter of conjecture, however, T-50 may indeed be based on Flanker. However it appears closer to an F-35 class aircraft with respect to stealth, construction methods, takeoff weight (less than F-22 ) and projected price per copy? 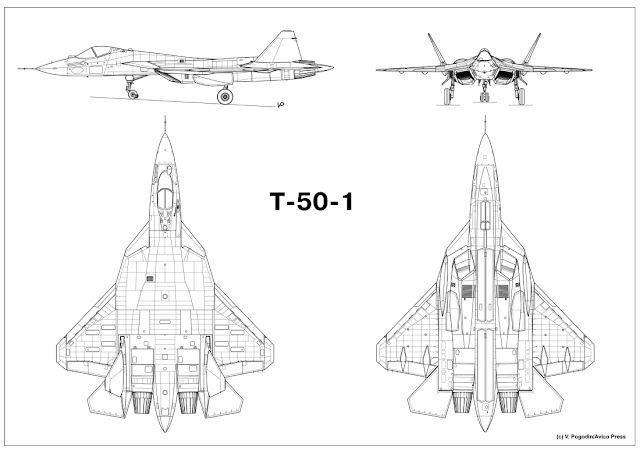 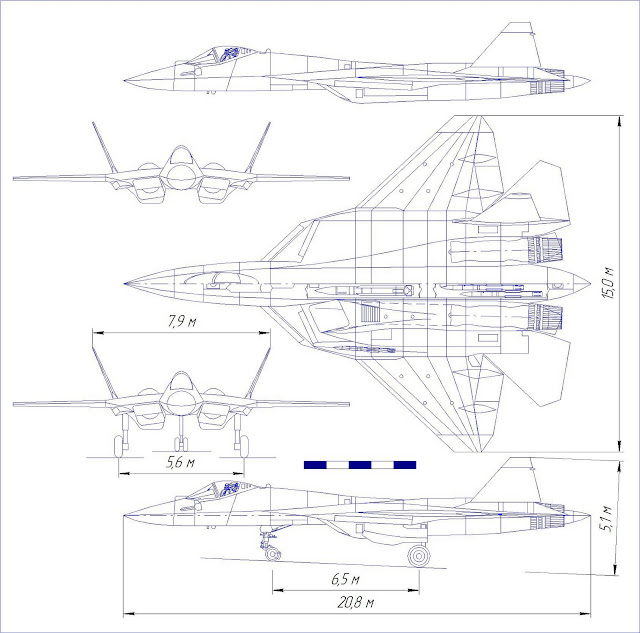 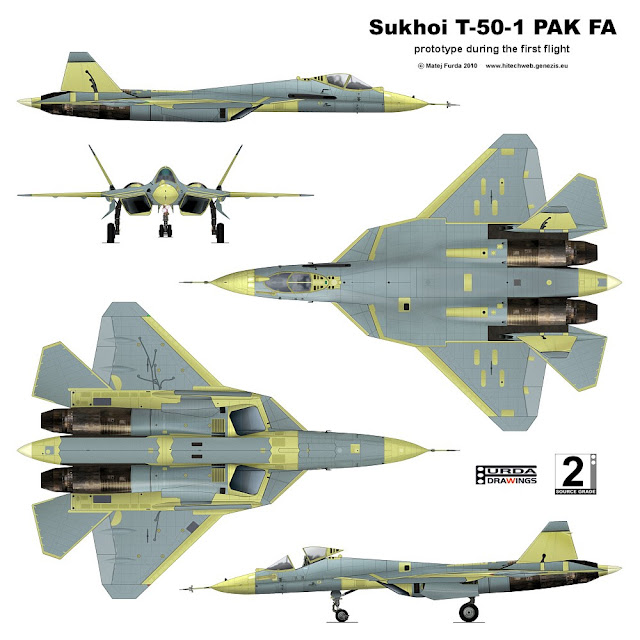 It is true that external stores create much more drag than storing weapons internally. However, internal weapons bays (on small aircraft) use precious space in the airframe, which could be used for fuel?

Carriage restrictions and the demands of Stealthy clean silhouette have been abundantly evident from the American Small Diameter Bomb (SDB) program.

Has drag-reduction of ‘small’ fighters via internal weapons bays been offset by reduced internal fuel capacities? Without supercruise [The use of lower throttle settings for the same given airspeed] does the whole combat-radius discussion unravel?

If T-50 is indeed effectively based on ‘Flanker’ then this issue would be mitigated to some degree.

[Below] During actual operational intercepts, this Raptor and her external drop tanks - are clearly visible. 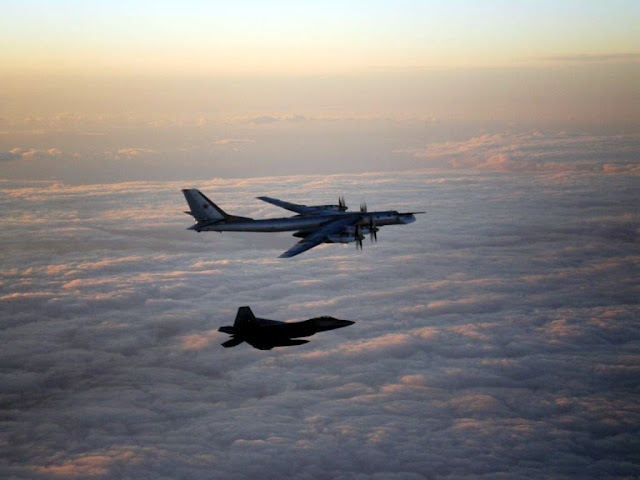 Even with supersonic cruising, the fuel penalty of internal weapons bays for a small fighter, and so the 'combat persistence penalty - may be high.

[Below] The Sukhoi Su-47 'Berkut' (Су-47 Беркут - Golden Eagle) prototype first flew in 1997. This impressive machine reportedly never saw production but was rather a technology demonstrator. 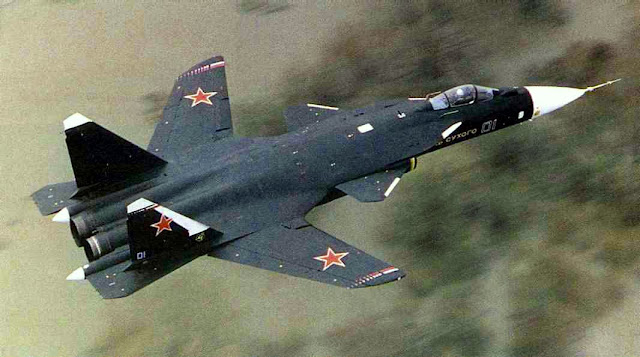 Russian sources also say weaponry development will take some time. This is understandable. If PAK-FA is put into production she will need to engineer herself through all the issues discussed here?

Remember that an all-aspect stealth fighter (an air superiority fighter that defeats radar energy by keeping it from reflecting back to the transmission source) - inherently invites a paradox - attempting to use its own air-intercept radar (as the same radar mechanics apply) - to conduct its mission.

The paradox is created because of the return radar energy from an opponent and the return radar energy from your own air-intercept radar. So either enormous power is needed to overcome one's own stealth - or – the nose of the all aspect fighter using only radar to find targets - has little or no stealth whatsoever – radar signals must pass freely through the skin and nose cone - and so we’re back to detection by the opponent; F-22 will likely try to engineer around this paradox with a DRFM/signal cancellation scheme. However, it remains an open question for an aircraft claiming to "dominate" global airspace for the next 30 years – and at ~ $350 million per copy. What is more likely is the nose of the F-22A has little to no stealth. Best to imagine the F-22A flying around without a nose random - when imagining its stealth. 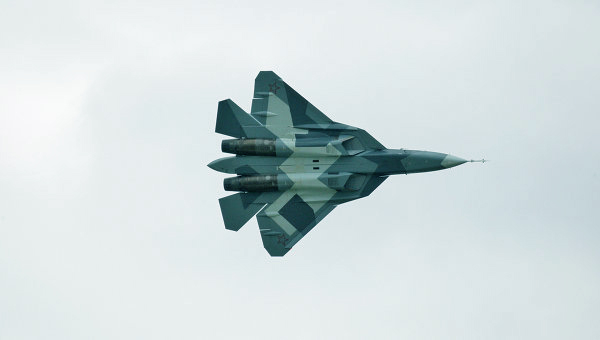 In general, it is our view that highly stealthy aircraft built-in numbers - are by definition - offensive (not defensive) in nature.

I would invite nations that field these systems - to stop and ponder recent history, power, and the perceptions of power.

What should be said about the resulting toll of Iraqi civilians starting in 2003 from Shock and Awe?

Who decides to wield that power? Have our institutions been effective in controlling the use of power?