on December 01, 2020
01-Dec 2020: New information has come to light, that indeed confirms what we have always suspected - that a second F-117A was hit in 1999 during Operation Allied Force, by Serbian air defenses using longwave radar frequencies operating outside the x-band. Please scroll down.
A combat fighter - given sufficient combat persistence - is tasked to: search, locate, target, interrogate (IFF), coordinate, maneuver, and employ weapons - against other aerial objects. 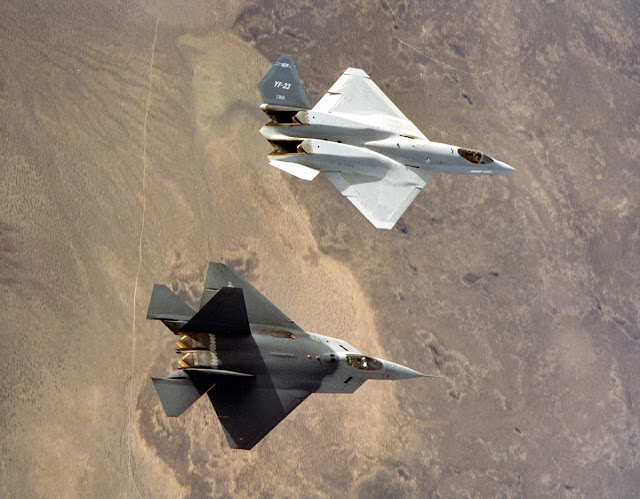 This is a vastly different mission than that of bomber, strike, observation, or reconnaissance, which are free to exploit "avoidance" - at all costs. 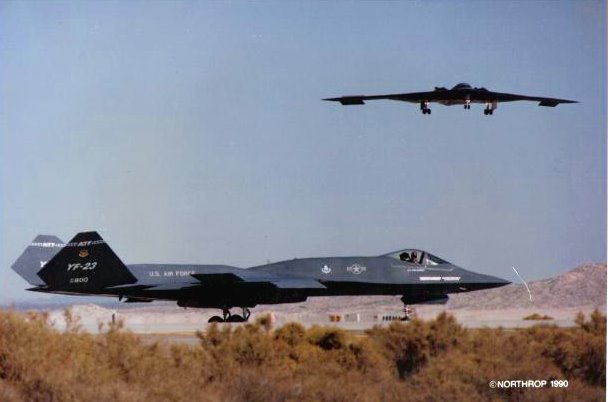 The word RADAR is an acronym for Radio Detection And Ranging.

If a fighter-platform primary targeting/engagement sensor uses the same radio electromagnetic spectrum that - that same - fighter-platform is designed to conceal/defeat - could this not incur inherent aerial object (target) detect issue(s) under some/all/specific operational conditions?

For the stealth fighter - an inherent Paradox?

The mechanics of one's own radar (radio) return signals passing freely (transmitted and received) back-and-forth through the nose of a radio-spectrum-defeating barrier, (stealth) opposed to an aerodynamic defeating barrier, (a traditional conical nose shape) – is an engineering problem that should not be underestimated.

[Below] Northrop-Grumman literature states the F-22A radar set exhibits a low radar cross-section. Why would AN/APG-77 own RSC need to be low? If it is behind a radar defeating barrier???
The answer is that radar frequencies must pass freely thru the F-22 nosecone. This means an opponent can also see through and behind the F-22 nose and see the APG-77 radar and other structures around the APG-77s array. This is why the AN/APG-77 must have a low RCS, and other structures behind the cone random must be treated for low RCS
Northrop-Grumman literature on APG-77 RCS has since disappeared, so see here, source: Ancile
Indeed, this may include any radio-spectrum signal traffic, including aircraft communication, data links, aerial weapons guidance, telemetry, and battle networks. 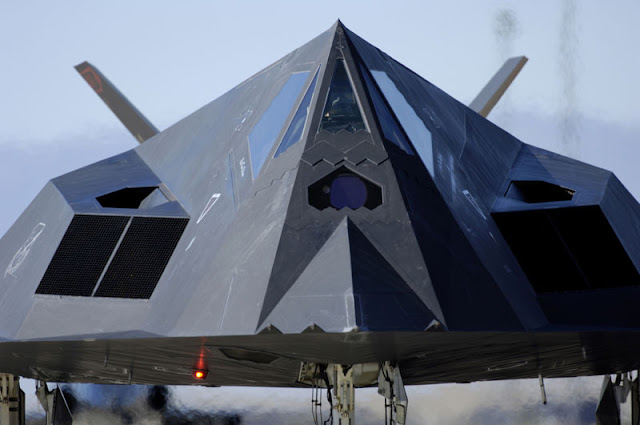 According to publicly available information, the F-117A did not possess or employ radar. The B-2A bomber primary weapons are GPS-guided munitions, however, B-2A also incorporates a synthetic-aperture class radar using radar frequencies optimized for ground detail (understandably) rather than long-range aerial object interception. This radar is reported to use two very small radar units under the leading edge of each wing. (1) 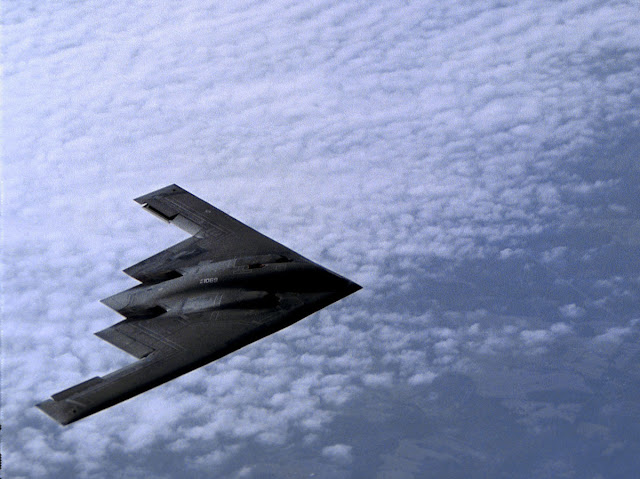 In effect, the B-2 is designed to defeat all manner of air-intercept radar frequencies while at the same time, not relying on these (same) radar frequencies to conduct its mission. A “stealthy” combat fighter will not have this luxury.

Industry observers and stealth proponents will argue only specific frequencies are allowed to pass freely with/through the stealth aircraft's skin. This compromise could loop back and open vulnerability windows from hostile radars? 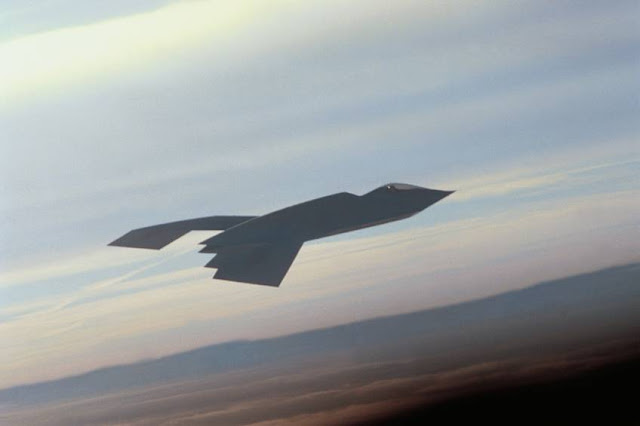 [Above/Below] The McDonnell Douglas “Bird of Prey” developed in the 1990s. It's hard for anyone not to be intrigued by the exotic shapes of this technology.
Indeed it is stealth proponents that perpetuate the notion of invisibility in the public eye. The name 'Bird of Prey' refers to the Klingon ship cloaking device from the Star Trek TV series - that renders the fictional Klingon ship - invisible. These types of names - at the end of the day - are not helpful.
This aircraft testbed was a subsonic technology demonstrator. Note the desert terrain where the test program was conducted. This is key, so please keep reading. 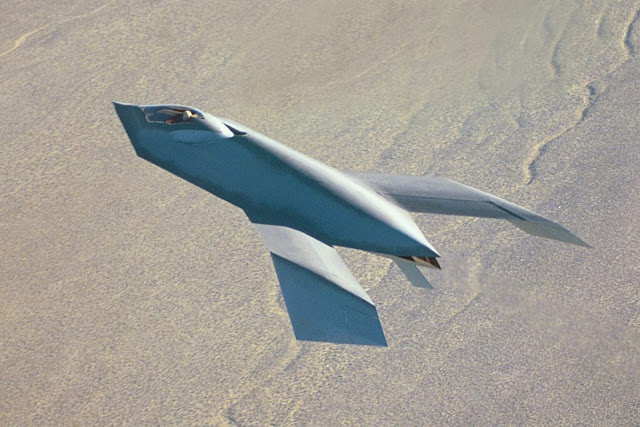 It is important to remind the reader that things like aircraft wake turbulence (wake-vortex) detection, wind-sheer detection, and weapon-location-radar technologies, could indicate what also lies ahead for the radio spectrum airfoil. 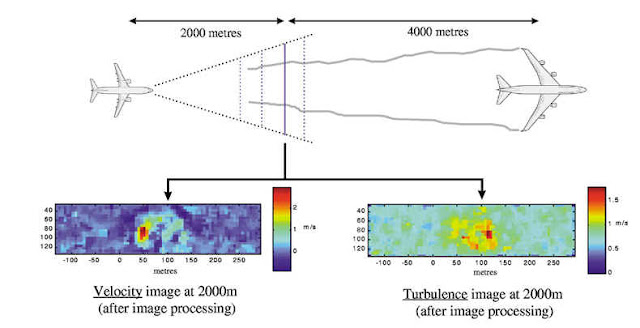 By the USAF Association own assertions, the AIM-120 engagement ranges seem to fall well within the detect range envelope, of modern (and so non-radio spectrum) infrared search and track (IRST) systems?

Air-to-air missile ranges have historically been "extended" by the launch aircraft accelerating into a supersonic "dash" - to give launch weapons more energy at weapon release - in effect - "to push."

Supersonic flight generates aerodynamic airframe heating due to atmospheric friction as kinetic energy is converted to heat at the skin.

A supersonic aircraft must be designed to operate and function under very high temperatures. The Lockheed SR-71 Blackbird could fly sustained periods at Mach 3.1 while portions of its airframe radiated temperatures of ~ 426°C (800°F) - at altitude. Indeed during Russian MiG-31 intercepts of the American SR-71 over the Barents Sea in the mid-late 1980s, the skin and canopy windscreen of the MiG would reach frictional temperatures of over 760°C (1400°F).

Both the Lockheed F-117 and Northrop B-2, and a myriad of unmanned drones are subsonic platforms with non-afterburning, (non-reheat) engines. 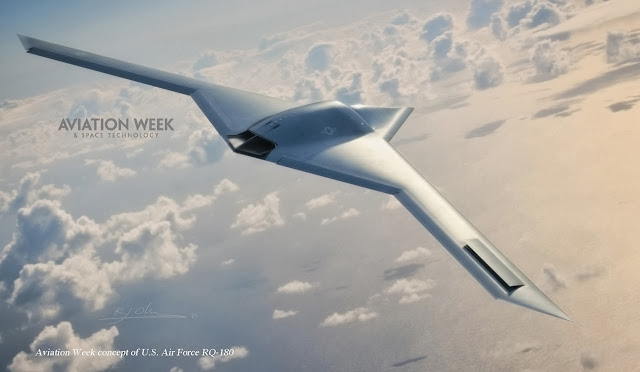 To date, there has been no response built and fielded in quantity similar to F-117, B-2 or F-22? Wind of an F-117 Nighthawk program must have been known by international intelligence agencies by say - the end of Ronald Reagan’s first term? 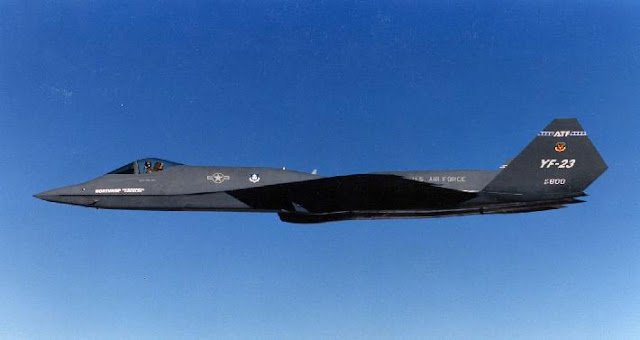 [Above] Early artist depictions of a Russian "Stealth fighter" look very much like the American YF-22. These renderings can at times be very effective at generating "buzz" in Washington to aid US defense manufacturers. 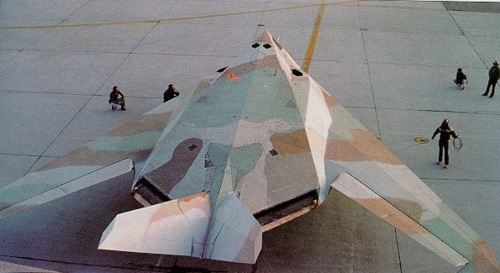 It is highly probable that were a stealth aircraft be forced to fly through weather - say a squall of frozen rain (icing) and thus altering its special external stealthy coating, the RCS (Radar Cross Section) could leap up to such a degree that the aircraft could (re)appear on an opponent's radar set - much like your local news weather-radar discerns precipitation and other objects in weather? The wet-frozen stealth aircraft appears on radar as a large ball of ice flying straight at 450 knots. 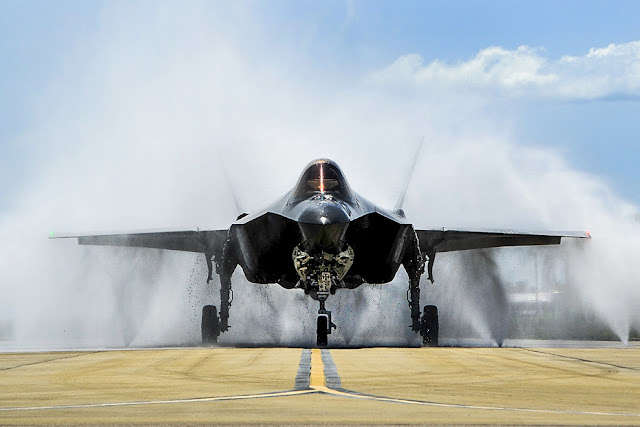 Is this classified? Well, when a stealth aircraft is washed does not the surface become glossy? The water is literally - altering - the ‘reflectivity properties ' of the skin of the aircraft. Icing (water-ice formation on the aircraft) is similar. Logically, stealth aircraft icing incurs the added risk of a reduced ability to manipulate radar echo mechanics.
Since the aircraft's boundary layer is slow-moving and turbulent - foul weather can be a problem.
NASA: "No aircraft is immune from the effects of ice. Do not assume that because an aircraft was able to fly with certain ice accretions once that it will be able to do so again. Every icing encounter is a new event. Small differences in the shape and location of an ice accretion can have very different effects on the aircraft's performance and handling. It is nearly impossible for the pilot to visually distinguish between an accretion that is flyable and one that threatens survival." Source
[Editors Note: 08-Aug, 2019; photographs of crumbling LO coatings on F-22A on a combat mission over Syria. Perhaps little wonder the USAF announced the Raptor fleet is to retire? Source ]
All these aircraft: the F-117, B-2, and F-22 were developed-tested in the deserts of the western US - places effectively devoid of foul weather - a fact that should not be dismissed. 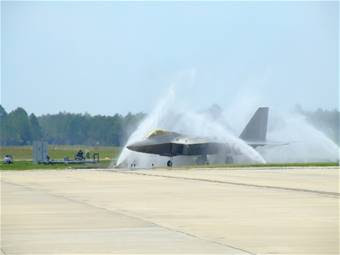 The ideal operational environment for stealth could be dry or arid atmospheric conditions – at night.

Remember, even if they see you – they still need to hit you. 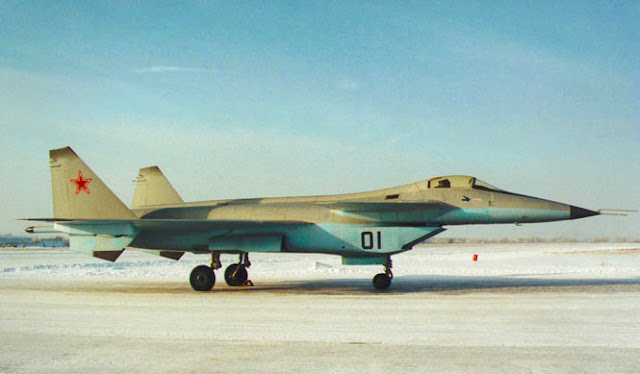 [Above] The MiG 1.44 MFI of the mid-1990s. This was the first aircraft where plasma stealth began to be discussed openly by many.

The use of plasma-stealth technologies has been discussed and possibly tested now for several years. The fundamental science behind the concept is valid. When spacecraft reenters the earth's atmosphere, all radio signal communication, and telemetry traffic is cut off, while an energy plasma envelopes the spacecraft. The inherent problem here is, by inducing a plasma (or corona discharge) to control opponent radar mechanics; the plasma itself creates its own host of electromagnetic (EM) emissions.

During Operation Allied Force in 1999, two (2) Lockheed Nighthawk F-117 strike aircraft are hit in combat by Serbian SAM air defenses. Nighthawk "Vega 31" is shot down by a Serbian S-125 (SA-3 GOA) SAM system on the night of March 27, 1999. A second "Stinkbug" Nighthawk is heavily damaged by a Serbian SAM (likely again S-125 / SA-3) on the night of April 30, 1999. This time the heavily damaged F-117 is able to tank (air refuel) and limp to Spangdahlem Air Base, Germany - heavily streaming fuel. Source
"While the recognition that another F-117 was damaged by Serbian air defenses during Allied Force is noteworthy, Hainline emphasizes the fact that SAMs were a real concern for the “Black Jet” in any combat scenario. He describes how the F-117 would be routed to avoid “double-digit” SAMs — referring to the Russian-made SA-10 Grumble, also known as the S-300, and more advanced types — since the jet was considered “low observable, not invisible.” Even comparatively old systems, such as the SA-3, remained a genuine threat, as confirmed by the downing of “Vega 31” earlier in the campaign." Source
[Below] Here is a video of the downing of "Vega 31." Most now agree (today) that long-wave radar frequencies are used to detect and target American stealth aircraft. Open or closed weapon bay doors are not a decisive factor in either the March 27 or April 30 events. Vega 31 is hit over a minute and a half later after coming off the target. Seeing the Nighthawk wreckage is sobering:

Whatever utility stealth aircraft have - they must operate together with dedicated electronic attack/suppression support assets.
Whether other nations will actually develop and deploy an F-22 class aircraft - in numbers - time will tell. 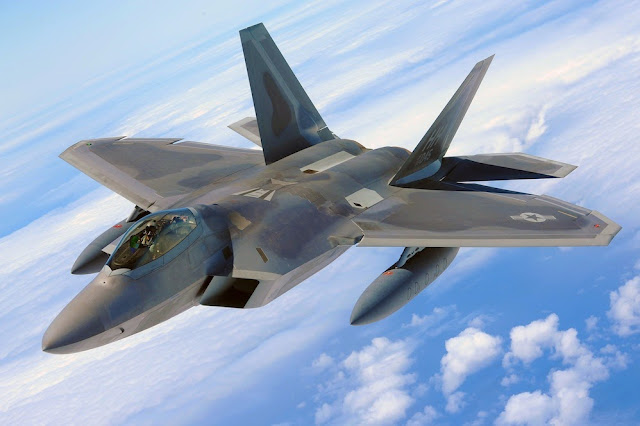 
-- All media found here is for scholarship and research purposes and protected under U.S. Internet ‘Fair Use’ Law -