on February 25, 2021
19-May 2021: Now we get this jewel. See here.
17-July 2020: Since our original writing, new images have emerged and the USAF has perhaps ordered some 200 examples of the F-15X. The first order is for 144 aircraft. The aircraft feature more internal fuel, (like F-15E), and new weapons hardpoints, and fly-by-wire. Infrared search and track will also be included. Currently, Boeing's website shows a two-seat aircraft called F-15EX. Rumors of a single-seat F-15CX might also be in the works.
19-May, 2020: it is revealed the F-35 price is actually nearly $176 million per copy. A figure over $100 million higher than claimes by Lockheed Martin and the F-35 Joint Program Office.
"The contract includes options for up to 200 jets, with the Air Force projecting it will buy at least 144 F-15EX aircraft, said Air Force spokesman Capt. Jacob Bailey. Each jet is projected to have a unit flyaway cost of $87.7 million." Source
Gen. Mike Holmes, Air Combat Command commander, said in a statement. “The F-15EX is ready to fight as soon as it comes off the line.” Source

"US Air Force wish list includes more F-15EX jets but no F-35s" Source
The F-15EX buy by the Air Force simply underscores our [the] skepticism of stealth fighter uneven capabilities at high program cost. We also remember listening to stealth fighter proponents drone on about "high drag" of 4th gen fighters external weapons.
Never mind that putting weapons designed for external carriage - internally - caused all-new sets of problems. Indeed we believe the USAF has never flown their stealth fighters on a high endurance test sortie and then conducted live-fire weapons tests on all internal weapons. Like a real war. Doing so would reveal an unacceptable rate of the weapon round malfunction due to long hours of in-bay carriage. 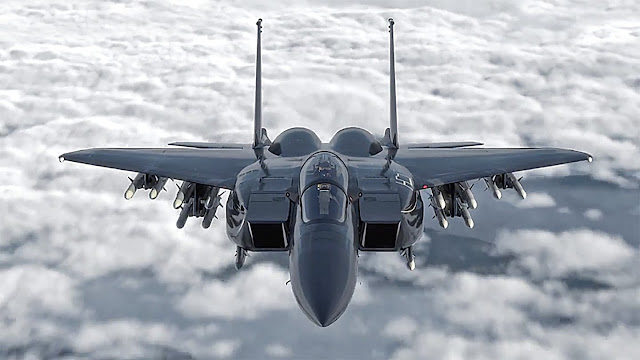 The F-15X proposal would address two acute issues with the F-15C. Poor fuel fraction requiring mandatory use of extra external drop tanks and second, not enough missile rounds. The need for more fuel for combat persistence can be read here, and the need for more missile rounds can be read here. Non-stealth fighters have effectively no sensor or carriage restrictions, higher mission capable rates, and lower operational and acquisition cost(s). Gen 4 fighters can be fitted with sophisticated ECCM jammers and fire the same (or better) weapons than their stealth counterparts.

Below is from Defence One

Dubbed the F-15X, the new variant of the venerable jet offers more modern flight controls, cockpit displays, and radar, according to military and industry sources with knowledge of the plan. The plane would also pack a lot of firepower, carrying more than two dozen air-to-air missiles, the most of any U.S. Air Force aircraft.

Boeing officials declined to explicitly confirm their efforts to sell the F-15X, except perhaps obliquely:

“We see the marketplace expanding internationally and it’s creating opportunities then to go back and talk to the U.S. Air Force about what might be future upgrades or even potentially future acquisitions of the F-15 aircraft,” Gene Cunningham, vice president of global sales of Defense, Space & Security, said Friday at the Royal International Air Tattoo in England.

The Air Force has not purchased new F-15s since placing a 2001 order for five F-15E Strike Eagles, a two-seat version that can bomb ground targets and shoot down other aircraft. The original F-15 first flew in 1972, and many of the Air Force’s current air-to-air Eagles entered service in the 1980s. Many of them are older than the pilots who fly them.

Unlike its successful Super Hornet pitch to the Trump administration last year, the F-15 pitch has not made its way to White House, according to sources with knowledge of the project. When Trump visited a Boeing commercial factory in South Carolina in February 2017, reporters traveling with the President spotted then-Chief of Staff Reince Priebus with a Boeing white paper that compared an advanced version of the Super Hornet to the F-35 Joint Strike Fighter made by rival Lockheed Martin.

Air Force leaders say they are currently evaluating their mix of aircraft.

Among the options being considered are new versions of F-15s and F-16s, according to one Air Force observer.

American allies Israel, Saudi Arabia, Singapore, and South Korea fly tailored versions of the F-15. The newest member of the Eagle club is Qatar, which ordered 36 aircraft last year and has an option for 36 more. Boeing is also pitching the F-15 to Germany, which wants to replace its Tornado jets.

Boeing’s Cunningham, said the firm is also offering upgrades to existing F-15s with technology used in the newer ally aircraft.

The F-15 is considered a fourth-generation plane, one that does not have a stealth design, which helps it evade enemy missiles. For more than a decade, Air Force leaders have long pressed for buying only stealthy fighter and bomber aircraft. Buying new F-15s would reverse that.

“This is the most traction I’ve ever seen legacy four [generation aircraft] get in the Air Force,” the Air Force observer said.

The F-15 was supposed to be replaced by the stealthy F-22 Raptor — considered the top air-to-air combat fighter. Despite objections from top Air Force generals, then-Defense Secretary Robert Gates ordered an end to F-22 production in 2009. The final jet came off of Lockheed Martin’s Marietta, Georgia, production line in 2012. In all, the Air Force purchased 187 Raptors, far less than the more than 750 originally planned.

At the time, Gates opted to invest in the F-35 Joint Strike Fighter, a multi-role fighter, which can shoot down planes and attack targets on the ground with its array of advanced sensors, radar and sensors.

Foreign versions of the F-15 have received newer technology not around when the American planes were built. Over the years, U.S. F-15s have received upgrades to their radars and cockpits, but the Air Force recently canceled an effort to add electronic jammers to its older F-15Cs. Some Air Force observers said that indicates the service might retire the plane sooner than planned.

Boeing has long pitched new versions of the Strike Eagle to the Air Force and international customers. In 2010, the firm pitched the Silent Eagle — an F-15 with special coating and canted vertical tails — that executives said could better evade enemy detection. In 2015, it pitched an upgrade to the F-15C — the aerial combat version — that would allow it to carry 16 air-to-air missiles.

At times, Boeing has argued that upgraded versions of their planes could come close to matching the advanced stealth, sensors and electronic warfare capabilities of the F-35 at a fraction of the cost.

Now the savings might not be as much as the price tag of the Air Force F-35 has been dropping annually. The Pentagon on Sunday announced it has a handshake agreement with Lockheed Martin for a new batch of 141 F-35 Joint Strike Fighters. The Air Force version of the plane cost about $89 million per copy, according to a Reuters.

An Air Force source noted that buying new F-15s now would not be seen as competing with the F-35 since the the Joint Strike Fighter has never been considered a replacement for the F-15."